The “date” with 4Bitten is set for Thursday night, at their rehearsal studio. We gather at eleven-ish and start putting the interview together. Sofas switch places, guitars become a functional addition to the background, recording devices and questionnaires get in position and cameras are adjusted. Yiannis Dolas is setting and checking and giving the final direction instructions and I’m just the usual tourist/visitor on the set… We’ve got George (guitars) and Fofi (vocals) with us, along with their enthusiasm about playing with UFO in a few days! Has “Delirium” made the breakthrough for the mighty Greek band?

How are they feeling, how are they seeing their future? We’ve had the best time with the boys and the gal, wrapped it up around two thirty in the morning and got to see them play a couple of songs just for us, in order to use the footage for the video interview. We are so very proud of 4Bitten! I’m gonna leave you with Fofi’s comment on her participation in the immortal Metal singer tribute in Athens. “I was so nervous and so honored. I was the only woman to sing a DIO song that night! Amazing voices, we’ve got some amazing singers in this country! I’ve had such a great time, I will never forget it”!

Rockpages.gr: European tour kicks off on February 21st. How far away is that date? Or is it too close? How do you guys feel? 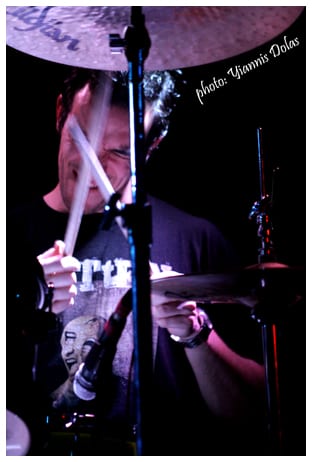 Fofi: (laughs) There are lots of feelings. Altogether. I’m nervous, I’m anxious, I’m feeling great, I’m scared… A bit of everything actually! On one hand it feels so far, on the other hand I feel it’s moving fast and I’m feeling so nervous… It’s alright, everything is gonna be okay!

George: We know about this tour for a long time now… Sometimes it feels so close and then it feels so far away, cuz we are looking forward to be on stage and play… It’s almost two weeks away. We’re close, we are ready, we will give everything we’ve got. We are playing along with one of the best Hard Rock bands in the world and we are really proud about that.

Rockpages.gr: All the anxiety will disappear when you guys set foot on stage?

Fofi: It will go away when the first note of the first song will sound; from then on there will only be joy and energy and satisfaction; all that hard work we’ve done will finally lead somewhere.

Rockpages.gr: Before getting on the plane for the tour, there’s one more thing you have to do in Athens, Greece though. You’ve got a gig on February 13th. Is this concert going to be the final rehearsal? Is it a party, you know, “Hey, you guys, we’re leaving, we’re off to our tour”!

Fofi: A bit of both I think. We’re gonna play with some great friends. Those three bands that will play with us… they’re all friends of ours, they’re killing bands and we’re gonna have a fantastic time. And yes, it is going to be something like our last rehearsal before leaving.

George: Yeah, both! It’s been a long time since we played in Athens and it’s actually our first Live before taking off to tour with UFO. And I think that we’re going to destroy the stage!

Rockpages.gr: The fact that it’s been a while since your previous concert in Athens has to do with the fact that you choose to play in Athens or Thessaloniki, say once a year…

George: Over the last few years we changed our philosophy towards the “Live” issue. We want to choose specific venues, we want to do a live appearance depending on what we want to say and how we’re going to say it. The idea of doing a Live gig just for the shake of it, is purely unreal.

Rockpages.gr: Any surprises about this specific show? Are you going to have any guests on stage?

Fofi: The singer and guitarist for Black Door, Alex Chrys, has participated on the “Not This Time” song and we will invite him on stage to sing along.

Rockpages.gr: Let’s talk about “Delirium” a lil’ bit. It’s been almost nine months since it was released. What kind of feedback have you been getting from magazines, fans etc.?

Fofi: We’ve got some very positive reviews so far, from all over the world. From many countries in Europe and even from America! Something which helped us a lot in getting this tour slot. We just hope that fans reaction would be as positive as the reviews we’ve had…

George: “Delirium” has been getting many good reviews, in Greece and abroad. We are really happy about that. Like Fofi said before, the album was almost our ticket for the tour, it was the one attracting UFO management’s attention. We managed to come up with good material and do the next step, this tour… 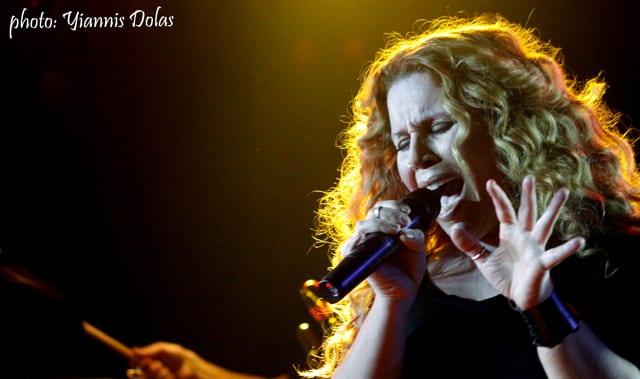 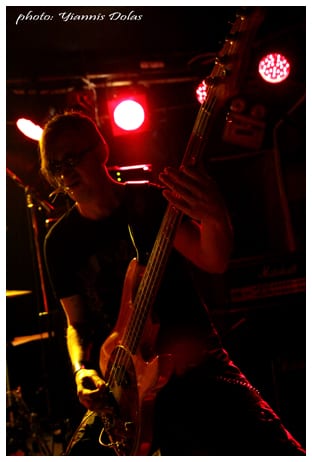 Rockpages.gr: When we talked about the album last year, we also talked about a video option. Now with the tour and all, are you going to do a video based on the upcoming live shows Live footage?

Fofi: We have talked it over with our label and we’ll see how it goes. Naturally we’ll videotape parts of all our shows and then decide how we’re gonna use them. We are still talking about it. We are going to do a video for this album though.

George: Yes, we are working on it as we speak. We gotta do a video clip, we don’t have an official video clip yet and that will be arranged when we get back from touring. It will help us promoting our songs, it will be another “plus” for us.

Rockpages.gr: You are also booked for the SOS Festival. When you were playing at the fest, almost three years ago, you went up on stage to participate on “Heaven And Hell”! Should we expect a similar extravaganza?

Fofi: We really don’t know about that. What happened then was actually a surprise, we were told when we got there. I have no idea what they’re thinking of for this year. Dave Evans, the first AC/DC singer will be headlining, I don’t have a clue about what they will tell us but I bet they have already thought of something.

Rockpages.gr: We have spoken about “Delirium”; is it a good time to talk about the material which will follow? Do you have any new stuff?

Fofi: Yes! We keep on writing!

Rockpages.gr: Should we expect the new album next year? 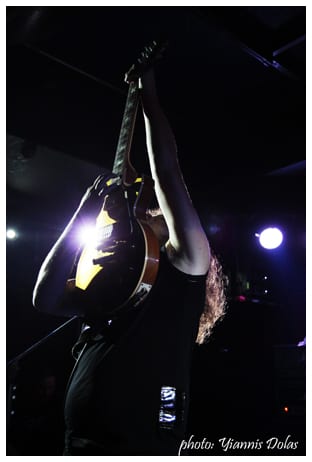 Fofi: We have started working on some ideas and rehearsing but I can’t tell for sure it’s gonna be out next year. “Delirium” has got so much to give still. The tour with UFO is just the beginning. I can’t say “next year” but it’s gonna be soon! (laughs)

George: I have already started working on some new ideas. For the time being we want to work and tour with “Delirium” though. When the time comes, we will release new material and perform it live as well.

Rockpages.gr: Next album’s motif, based on the songs you’ve got so far, is going to be close to “Delirium”? Are you done with the “No More Sins” sound?

Fofi: No, I wouldn’t say that. We just get more mature and we get influenced by new stuff in our lives. I always say and I said, when we did our debut and sophomore album, that these songs are like a snapshot of where we were at the time. “No More Sins” was our first “baby” and you can hear all our influences in there. That’s why every song in the album sounds different. This album (e.n. “Delirium”) was clearer cuz we were clearer about what we wanted to hear. And the next album will be equally specific. And harder, I might add…

George: Well, I think that “No More Sins” and “Delirium” feature common elements. We have definitely taken a more Heavy Rock direction, sound more American; that is what we’ve been trying to do. Trying to match our 70’s and 90’s influences with our own personal style. It’s a bit early to talk about the new material and the way it sounds, yet I can say that it’s going to sound more aggressive than “Delirium”, however it will have common elements with the first two albums. It’s inevitable.

Rockpages.gr: I’m pretty sure that your label, Rocksector Records, is taking good care of you, right?

Fofi: Yes! We are doing really well with our label, we are really glad we’ve got this label with us. This is the reason we continued with them and released our second album with them. That was our decision cuz we were so satisfied with our cooperation. They take good care of us, they’re like family, they believe in us and since we share the same dream, we’ll keep on working together.

George: Things are going really great… We have a fantastic cooperation, they look after us, they are helping us do the right thing. When we are satisfied and they are satisfied, too, our cooperation is going the way we both want to go.

Rockpages.gr: Fofi, remember that thing you said about the 4Bitten train? That it’s ready to smash everything on its way?

Fofi: Oh, yes! Yes, we are full of energy, ready to smash everything on our way! (laughs) 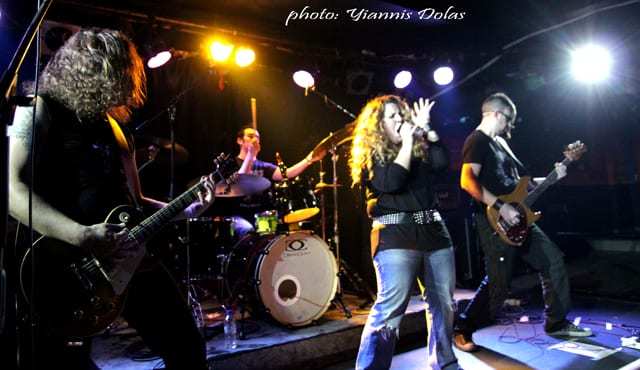