They say that 80s is the love era: I say that’s a more traditional view. In this article, you will not read about my experience of the 80s, since I wasn’t born until 1991! Although I am a 90s kid, musicians like Chris Cornell, Kurt Cobain and Eddie Vedder never touched me. Music for somebody like me is the reason to leave the house and go out partying all night long. You’re going to dress along with the party mood that you are and you’re going to have an amazing time without feeling sorry or being miserable. I want the lyrics of the songs to talk about sex, drugs, rock n’ roll! 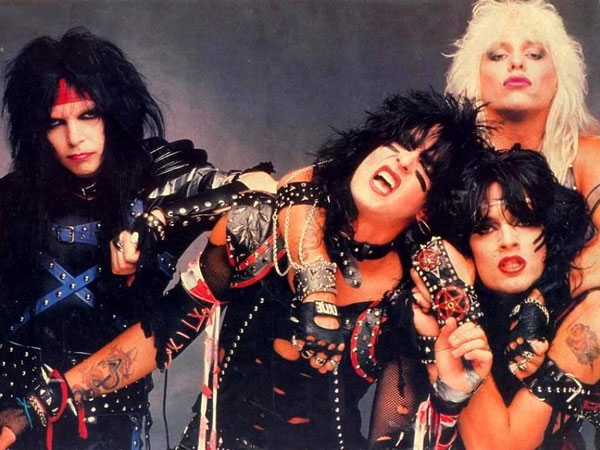 I don’t need my favorite band to remind me about everything that goes wrong in this world. I want it to make me forget all about it and have an awesome time. I don’t want to feel like everything sucks after a show and I don’t want my favorite band to be dressed with plaid boring shirts and stupid college halfway-parted bowl-cut hair. I want them to wear spandex, nail belts, zebra οr leopard figures and more glitter! Until I was in my 20s, I did not hang out with people who knew about hard rock music. I chose my music and nobody ever told me what to listen to. ‘’Music, you know, true music – not just rock n’ roll – it chooses you. It lives in your car, or alone listening to your headphones, you know, with the cast scenic bridges and angelic choirs in your brain’’, quoted Philip Seymour Hoffman in one of my favorite movies, “Almost Famous”. 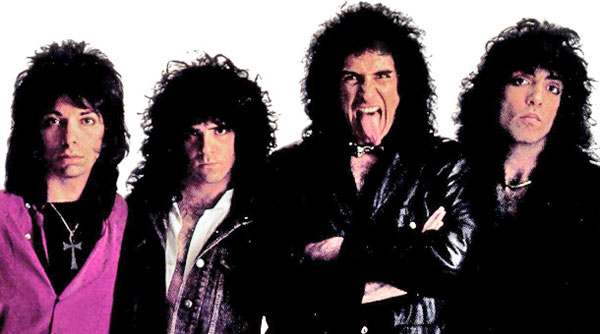 When I was 14 years old, I used to listen to bands like Scorpions and Guns N’ Roses on the radio, but unfortunately, most radio shows weren’t really into that music, so they didn’t promote most bands of the hair metal era. I needed someone who knew how to teach me about Steelheart, Poison, Motley Crue,Ratt, etc. Some people might see it as a joke, since bands like that weren’t famous for their amazing riffs or technique but mostly for their image and their hooks. Like I said in the beginning, music was the escape I needed to feel great and forget about my problems: and hair metal was exactly that kind of music! Up all night, sleep all day was the feeling of those years and in some cases still is…

There is no chance I am going to make hair metal musicians look like the amazing guys that everyone should have as an example. I don’t find them awesome as personalities. I loved what they did back then with their image and I loved their music; that’s all. Most of them unfortunately are a lost cause, brain-dead junkies. But I don’t care as long as their life doesn’t affect their music or their live shows. If you have some free time to spare check out the documentary “The Decline Of The Western Civilization” or read Slash’s autobiography, I think they explain about this time a lot. But the decadence exists when they are off stage: when they perform live, everything changes! Their style, their movements and their songs make them look like they own the place, and you cannot stop staring at them. 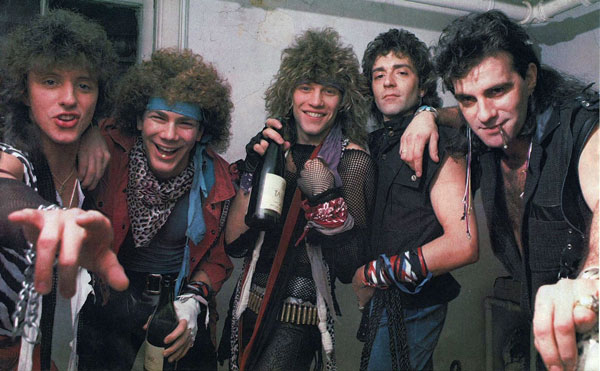 What makes me really sad with Greece is that I never had the chance to enjoy many of these bands live because no one would pay for them to play here. This is the fans’ fault of course especially when bands like KISS can’t gather more than 7000 fans or Dokken and Europe more than 200. To be honest many of these bands are not that good live anymore, but that never stopped the Greek metal fans from attending Paradise Lost gigs 50 times!

Luckily, there are still some Greek bands that try to promote this kind of music with hair metal covers or even with their own albums. Some of them are really making it! Just a few are Star Star, Wild Machine, Addiction, W.A.N.T.E.D., Outloud, Redrum, Wild Rose, Jailcat, Cyanide 4, Wild Kitten and Ailafar.

The first 3 bands will play live on March  5th at Second Skin club in Athens, Greece, at the “Live Fast-Rock Young” festival: it’s the first time in the 00s that a festival full of glam bands takes place in Greece. You can also get more info on the “Crash Parties” fan page in Facebook.

Below you can read about my favorite albums of the 80s and a few bands that really influenced the hair metal scene.

This is one of the most important albums in the English history of hair metal.

The producer of Pyromania is the famous Mutt Lange, who is mostly responsible for Def Leppard’s sound. With this album, the band changed the New Wave of British Heavy Metal scene into a more pop-metal sound.

This is their first album with Phil Collen.

MTV constantly aired songs such as Photograph, Foolin and Rock of Ages which made them one of the most famous bands in England. Pyromania sold 10 million copies and it came in 2nd on the charts for being the biggest album with so many hit singles. After this release, some people blamed Def Leppard to be responsible for many bands of the 80s to change their sound to pop by using synthesizers and giant-hook choruses. 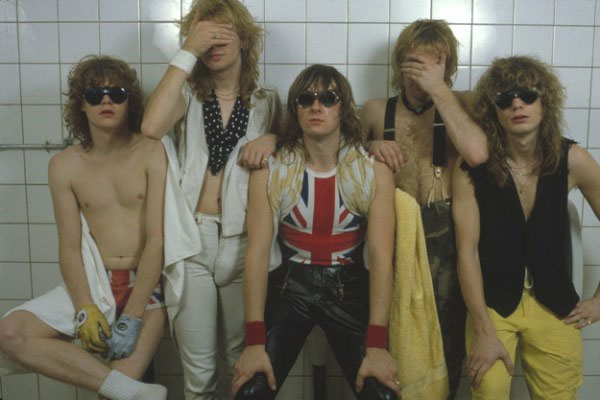 This is the last album release from the band Hanoi Rocks in 1984, before they decided to split a few days after their drummer’s death Ruzzle, who in died a car accident driven by Motley Crue’s singer Vince Neil.

Two Steps from the Move is their first album that achieved gold status.

The producer of the album is Bob Ezrin, known from his work with Kiss, Pink Floyd, Alice Cooper and more.

The lyrics “Welcome To The Jungle” in the “Underwater World” song inspired their fan Axl Rose to write the well known song  for Guns N’ Roses. 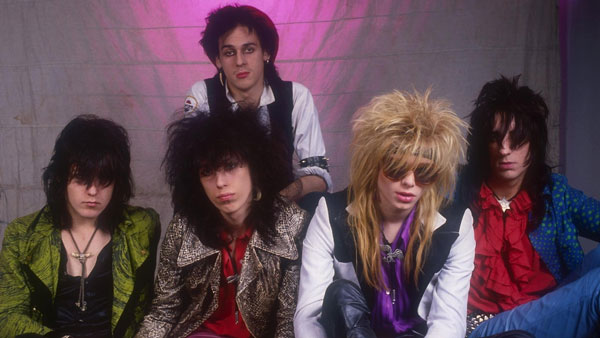 Slippery When Wet is perhaps one of the most important albums of the melodic metal scene, and Bon Jovi is one of the first bands to make A.O.R. music more famous. Some of the most successful rock songs of all time were on this album! Songs such as You Give Love a Bad Name, Livin’ On A Prayer and Never Say Goodbye stayed on top of the charts longer than any other song ever did.

Their first version of the Appetite For Destruction album was rejected because of its violent theme with a girl being raped by a robot monster: so they ended up with the cross that shows its member of the band as a skeleton figure. Because of that, they became even more famous and easily recognizable in every country.

Paul Stanley was supposed to be responsible for the production of the album but he wanted to make some changes, so they decided to go with Mike Clink (Whitesnake, Motley Crue).

Sweet Child O’ Mine  was the first and only song of GNR which climbed to number 5 of the Billboard Hot 100 of USA in 1988.

Fun fact: Think About You actually is not dedicated to a woman or a man, but in their love for heroin: not so romantic after all! 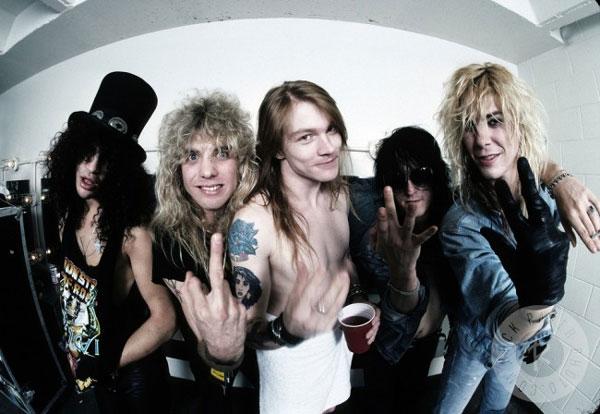 The album has sold the most copies worldwide and it was voted by their fans as the best album of their discography.

The producer is Bob Rock known from his cooperation with The Cult, Metallica, Cher, Bon Jovi and more. 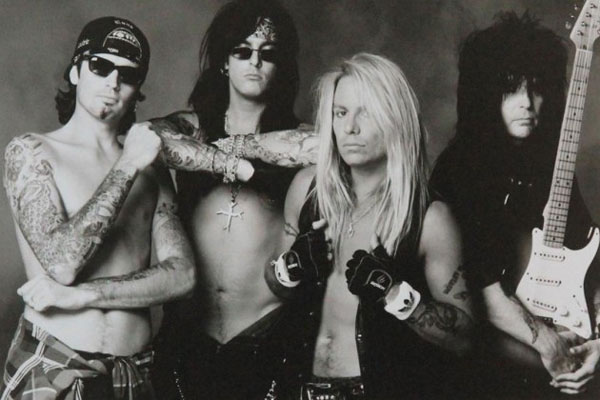