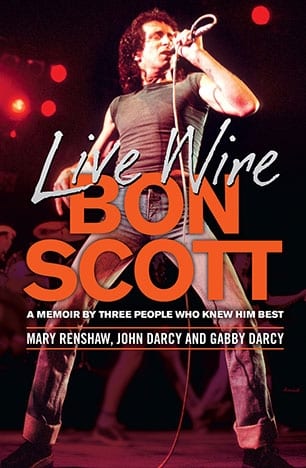 Mary Renshaw, John D’Arcy and Gabby D’Arcy’s new book called Live Wire is the insidestory of the real Bon Scott, told by three of the people who knew him best.
The world knows Bon Scott as the wild rocker, the frontman for AC/DC who tragically died of alcohol poisoning on the eve of the band’s rise to superstardom.
That’s the legend, now meet the man.
Live Wire gives us the Bon Scott we never knew. In this deeply personal and revealing portrait we learn what it was like to be his friend, live and tour with him, and be part of the close-knit world from which one of biggest bands of all time emerged. With Bon there was always sex, drugs and rock’n’roll, but Live Wire also demonstrates the humour, intelligence and warmth of the man. From his early days with The Valentines, living in rundown apartments in inner Melbourne, to the legendary early years of AC/DC, this is the story of Bon, told by three of the people who knew him best.