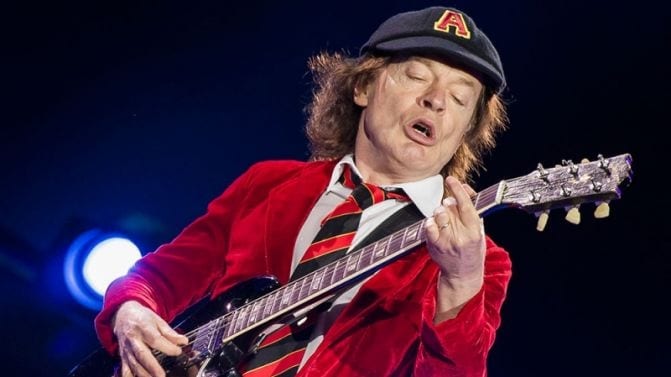 Is AC/DC recording a new studio album in Vancouver, British Columbia, Canada?
Canadian journalist Steve Newton claimed in an August 1 blog entry on The Georgia Straight web site that one of his “rock ‘n’ roll sources on the street” told him that he had a quick chat with a couple of members of AC/DC in downtown Vancouver earlier that day. One of the rockers that he allegedly talked to was Stevie Young, Angus Young’s nephew, who took over the rhythm guitar spot in AC/DC from Angus’s brother Malcolm in 2014 when Malcolm retired due to dementia. And the other AC/DC member Newton’s source supposedly talked to was none other than Phil Rudd, the longtime AC/DC drummer who was replaced behind the kit by Chris Slade in 2015 for the band’s “Rock Or Bust” world tour after Rudd was arrested for drug possession and threatening to kill an employee.
Newton doubled down on his claim in an August 2 post on his Ear Of Newt web site, insisting that he had “complete faith” in his source who said he saw — and actually chatted with — the two rockers.
The assumption is that, since AC/DC recorded its last three albums at Vancouver’s Warehouse Studio, it might be in the midst of making — or at least planning — another one, with Rudd back in the lineup on drums.