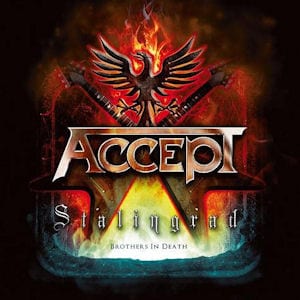 I consider “Stalingrad” to be a really important chapter in the Accept story. My key argument of that belief is the fact that it proudly succeeds “Blood of the Nations” after the logical two-year gab of time. “Blood of the Nations” was, of course, a great record but at the same time it caused a rightful debate whether it will be accept-ed (get it?) by the fans or not. The presence of a new singer was also a debatable topic but as it turned out the German outfit managed to bring back on fold their old time fans and gained new ones, too.
“Stalingrad” solidifies Accept’s position. I don’t really know how we can call or characterize the present phase of the band but it is crystal clear that everything is well-crafted, the level of musicianship is high and flawless and every single members puts on a superb performance while as a unit  Accept knows how to deliver a qualitative product. This is really important, taken into consideration the fact that the band’s legacy is too precious and it definitely shouldn’t be tarnished at all.
The sound and the whole logic behind the making of “Stalingrad” seems like the natural succession of “Blood of the Nations” (something that was expected, after all…). “Hung Drawn and Quartered” and the title track open the album and pave the way for the sonic assault that follows. The brilliant numbers of “Shadow Soldiers” and “Us Against The World” point to the uninitiated which are the musical roots of the band and they actually sound pretty nostalgic for all those who grew up with Accept in the 80s. The most impressive element of Accept of 2012 is how they accomplish to blend successfully the old-school, trademarks 80s riffs with a modern, clear metal sound.
“Stalingrad” is pure metal! It will be loved and embraced by all those who welcomed Accept a couple of years ago while it will bring aboard new fans who are more into the modern metallic sounds and missed the opportunity two years ago with “Blood of the Nations”.