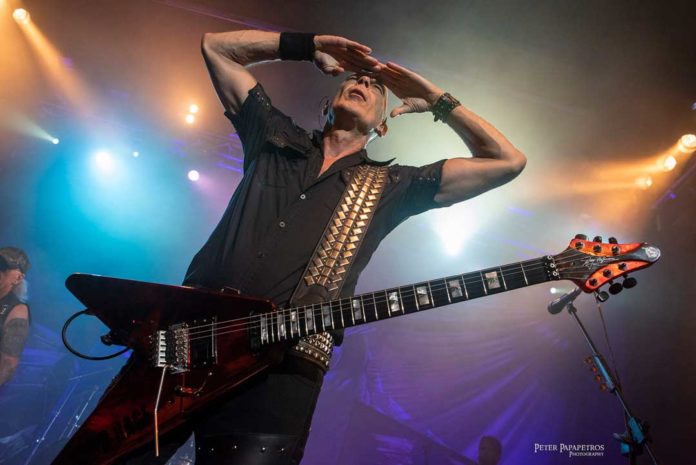 I will start by asking you a question: have you ever been disappointed by an Accept show? Let’s go to a second question before answering the first one: I wonder why someone would even discuss whether Accept is or isn’t the biggest German heavy metal band of all time. The answers to these questions are respectively: “No…definitely not” and “No need to do that…Accept IS the biggest German heavy metal band of all time”! So, the German…Panzer Division came, saw and conquered Athens last Thursday with a storming show that left everybody speechless but at the same time with a permanent smile on our faces…I guess that’s what a successful live show is all about, isn’t it?

Unfortunately, due to a huge queue outside the venue we couldn’t make it on time to catch the opening act; a Greek outfit of Degeneration Mind that played in a half-empty venue as slowly yet steadily everybody was making his/her entrance.

At 9:30 sharp and in front of an absolutely packed Gagarin Club, the first notes of “Zombie Apocalypse signaled the beginning of the show and right from the start it was plain obvious that Accept was on top form while the crowd was singing along to every single lyric and melody. Mark Tonillo was sensational behind the mic while Wolf Hoffmann was without a shadow of a doubt the absolute ringmaster as he held the crowd in his hand with a single guitar note or pose! He’s a legend and he’s rightfully considered a master of his craft; a technically brilliant guitarist. “Too Mean To Die” and “Living For Tonite” were performed back to back thus bringing the roof of Gagarin Club to the ground and by that point the vast majority of the fans lost their voice due to a constant sing along with the band! But we carried on like…Shadow Soldiers and the party continued with anthems from both the recent past and the glorious 80s. As you will see in the set list below, Accept focused on the latest album “Too Mean To Die” while “Blood of the Nations” and “Stalingrad” were also heavily represented.

In the end you only witness happy faces which showed perfectly well that we missed Accept so much and we missed live shows in general. It may sound cliché or detrimental but we really can’t wait for the next Accept concert…

P.S. The only thing that was missing was Peter Baltes right beside Wolf Hoffmann. I am sure that Wolf missed him, too.