Athenian band Achelous kicked off in 2011 as a one man project only to evolve into a full functioning group soon afterwards. After a demo in 2014 and an EP in 2015, they started working on the first full length release. The album is finally finished and titled Macedon, a concept release based on the story of Alexander the Great.

Rockpages.gr was invited to the pre-release listening session that was set to take place in The Music House studios.

Like in the similar event for the Reflection album Bleed Babylon Bleed last year, the evening was carefully planned by the band and the producer Stathis Pavlantis, rising to the standards of corresponding events abroad. The atmosphere was welcoming and the band very friendly and also confident for the fruit of their labor. After some brief off the record chat, we assumed positions inside the control room and band leader Chris Achelous pressed play.

Bound for Glory
The instrumental introduction in the world of Macedon. The questions concerning the musical direction of the album get a straight answer from the very start. Epic heavy metal!

Macedon
The title track was introduced a few days ago through a lyric video. The galloping riff that storms right after the acoustic intro nests inside your head. The chorus sounds like a tribute to Iron Maiden’s Alexander the Great, memorable and imposing.

Gordian Knot
Another epic tune but in a slower pace. This is definitely on the album hits. The amazing solo reminded me of Ross the Boss while the bridge and the layered vocal lines arranged by the singer Chris Kappas (ex Reflection) bring chills to the spine.

Blood
Insisting on the epic style, the tune is reminiscent of Sarissa and Reflection with yet another memorable chorus. Definitely a live track with contribution by George Thomaides (Reflection) on the backing vocals.

Gaugamela
The video clip for the song has already been filmed and I am curious on how the guys are going to present this special song visually. The leading instrument in this track is the Pontian lyre played by Stathis Pavlantis (Reflection) and also substitutes the guitar on the second part of the solo.

Persepolis
The band had Maltese reinforcements on this one since Leo Stivala (Forsaken, ex Reflection) is the guest singer. The beginning of the track reminded me of the Reflection classic When Immortals Die and shifts gear from being the fastest track of the album to a slower and epic tune. 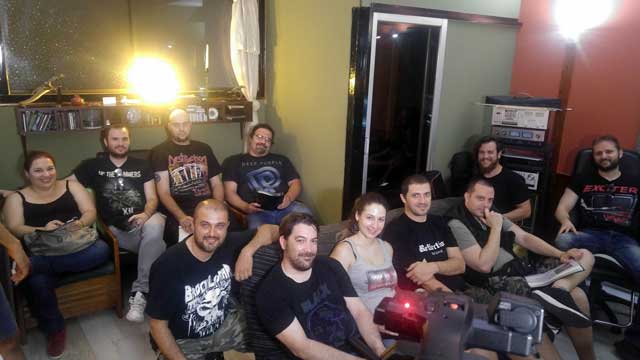 Warriors With Wings
The lead guitar on the track intro sounds like a homage to Running Wild’s Rivalry. Another epic and galloping riff in the vein of Manowar. Same things apply to the solo too.

Hephaestion
This is the ballad of the album. It’s a typical song that serves its purpose and turns more interesting towards the end. Female vocals by Dimitra Kaltsidou.

Final Day
White all the other songs of the album where composed between 2012 and 2015, Final Day dates back to 1993. An old song written by Chris Kappas found its place in Macedon. Bass duties by the respectable Antonis Mazarakis (Inner Wish). The song is keyboard driven and quite rhythmic making it impossible not to sway in its groove. A great solo for yet another time!

Al Iskandar
The song initially released in the 2014 demo, completely rearranged to fit the concept. A spot on solo is the cherry on top (the guitars in the album are exceptional).

Legends Never Die
Conductor Kostas Rekleitis arranged this instrumental outro in the vein of epic movie soundtracks and is the most fitting epilog.

This one listen was enough in order to highlight the quality of the album but for thorough conclusions we will have to wait a bit longer. Macedon will hit the market in September through Metal Fighters Records. The ongoing changes in the band line-up pushed the release date further but now the guys are confident that the sought after chemistry is present and Achelous will continue with brakes off both in studio and on stage. We wish them the best of luck. They deserve it!