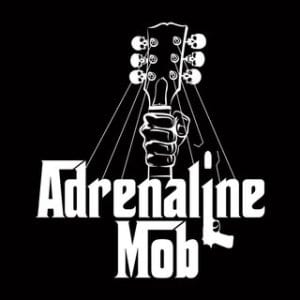 Progressive Icons Russell Allen and Mike Portnoy have other musical needs. In their long careers with their respective bands they have been the poster boys for progressive metal. In 2011 they decide to form a band called Adrenaline Mob. The band also consists of guitarist mister Mike Orlando who wrote all of the songs with Russell Allen, bass guitarist Paul DiLeo and rhythm guitarist Rich Ward.
For those that hoped for a new progressive supergroup Adrenaline Mob is anything BUT progressive metal. It is the heaviest, dirtiest, sludgiest and grooviest form of metal you can hear. The guitar riffs created by Mike Orlando are really powerful and energetic. Mike Portnoy feels free to play whatever and however he wants and the result reminds us why he is one of the best drummers out there. Russell Allen’s performance is exceptional and continues to display his great vocal abilities.
However the big disappointment in this E.P. is the songwriting. There is little to no variety in the 4 songs displayed in the debut E.P. While “Psychosane” and “Believe Me” have nice memorable choruses the main verses do not have anything to make them special. The songs “Hit the Wall” and “Down to the Floor” are really great and leave hopes for the full-length album. The E.P. closes with a Black Sabbath cover of “Mob Rules” with the band really making it fit with the rest of the songs.  All five songs in the E.P. are full of energy, adrenaline and power.
Overall, this is not a bad start for the band. Maybe it was not as good as some fans expected but it is not a bad start for sure.  It just needs a little bit more work in the song writing with more variety.  Let’s wait for the full-length album, which is scheduled to be released in early 2012, to reach safe conclusions.