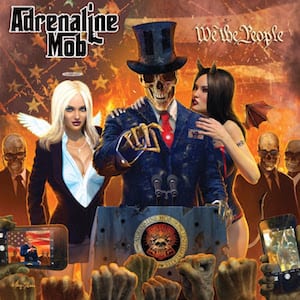 Unfortunately, not so long after the Mob released their third album a member of the band lost his life. Bassist David Zablidowsky had a fatal car accident while touring with his bandmates. It’s the second loss for them, after the passing of A.J. Pero (ex-Twisted Sister) from heart attack two years ago.

The memory of these musicians will remain. The memory of this album, not. “We The People” didn’t fulfill the expectations that I had after their other two awesome albums. It’s not that they changed their style, they continue playing heavy/groove metal but not as good as before. Mike Orlando does a good job with riffs and solos, Russell Allen (Symphony X) doesn’t need introductions, after all he is maybe the top voice of his generation, but in general something is wrong. Maybe it’s the terrible sound that messes up the final result. Especially the drums sound awful. It’ like they released a demo version of the album and not the final mix. And I say that by listening to the original CD and not whatever copy I found online. Besides that, there are songs that sound completely indifferent (pun intended). Some exceptions exist, like “King Of The Ring”, “The Killer’s Inside” or “Blind Leading The Blind”, but just three songs cannot make me listen to this album again in the future. Allen alone cannot save the day.

The Mob is a very productive band in their six years of existence. Besides the albums, they also have released three EP’s mostly with covers. And they have done a lot of them, nearly twenty. As bonus track, we listen to Billy Idol’s “Rebel Yell” with A.J. Pero on the drums. Fan fact: it has the best sound of every other song on the album.