“Into The Eternity A Moment We Are” by Aeonian Sorrow came and captivated me. Recorded by the drummer of the band, it is promoted by themselves without a record company and it’s an excellent release in the atmospheric doom/death metal scene. The leading force of this band, Gogo Melone (vocals, keyboards, music, lyrics, artwork), answers my call from Thessaloniki in one of the most enjoyable conversations I’ve ever done. Interview: George Terzakis 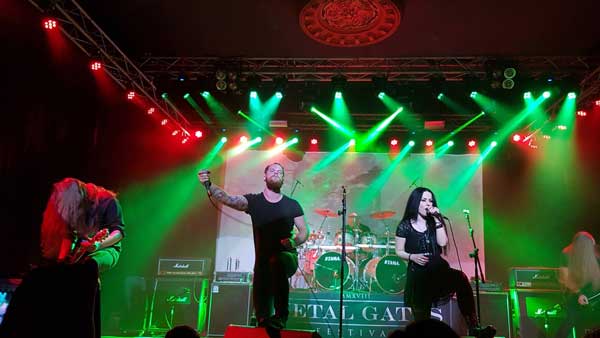 Rockpages.gr: Congratulations for this amazing album. What reviews did you have so far, considering that there was no big promotion for it, if I’m not mistaken.

Gogo Melone: Thank you very much. In Greece, no, there wasn’t a big promotion. First of all, there is no record label behind it, we are on our own. What we did was to send a promo to some magazines, mostly abroad. We got some reviews from there and we continue slowly for the best possible result.

Rockpages.gr: Any good reviews, something that you expected?

Gogo Melone: Yes, they were very positive so far for an upcoming band. We didn’t have any weird comments, in general they were very good, very encouraging for the future.

Rockpages.gr: At first, you wrote the music and lyrics on your own. What motivated you to do so? Was it the absence of Luna Obscura, even if these bands aren’t similar to each other? 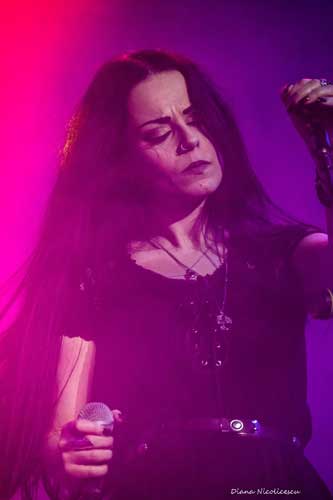 Gogo Melone: Yes, the truth is that they aren’t similar. I did a big pause from music for many years. I am a graphic designer and for a long time I dedicated my time mostly on my job until an inner search made me to start writing music again. Indeed, all the music and lyrics are mine. I started this project with piano and from there I put voices and got involved with music programs until I found the guys and formed a band. I knew some of them for many years and this is how this project got started.

Rockpages.gr: So, let’s open for a moment a parenthesis and talk about Luna Obscura. What is the status of the band?

Gogo Melone: The truth is that we don’t write music any more. There is nothing new. We talk about getting together some time in order to record a new album, but for now the band is in hiatus.

Rockpages.gr: I see that in a way you honored them, because the album title of Aeonian Sorrow can be heard in the narration of the opening track of “Feltia”, the debut of Luna Obscura.

Gogo Melone: Yes, it just fitted perfectly in the concept of the album and I wanted to state my next step somehow. I came from there and now I continue with something different.

Rockpages.gr: How difficult was for you to handle the composition process? It was something that you haven’t done before, right?

Gogo Melone: Yes, I got in the process to learn a lot of stuff through tutorial videos and started to develop all this slowly on my own. The rest came up on the way when I met the other guys from the band. We took things from what I’ve composed and started to tie them up to have a better result.

Rockpages.gr: So, were the songs almost ready when the guys joined or they got any different?

Gogo Melone: They were almost ready but everyone had to put in his own parts ideas. I had put some simple guitar and drum parts but the songs needed something more and that’s where my bandmates stepped in.

Rockpages.gr: As you mention in your official website, you were in a very bad situation when you started to write music and lyrics for this album. Do you think that this is necessary in order to write such emotional music?

Gogo Melone: I think that psychology has a big part in situations like this. Indeed, the time I was writing the album a lot of bad stuff happened in my life, including people around me who were really sick and all of this got me really down. The inspiration for the music came kinda on its own because of my psychology at this time. Of course, this doesn’t mean that if today I write another album it will be any different for what people heard on the first one.

Rockpages.gr: Aside from the emotional part, what were your musical influences when you started composing?

Gogo Melone: I don’t think that there were some specific influences, just my general love for melodic doom metal music.

Rockpages.gr: Probably you will get this a lot, but your main influence seems to be Draconian.

Gogo Melone: This happens because there aren’t many well known bands in this style of music and there aren’t a lot of bands who have ethereal vocals in the spotlight, you hear mostly brutal. So, it’s natural to someone who listens to a band with the combination of clean female and brutal male vocals to think of Draconian. But I tried to avoid doing something identical and to put some personal elements in it so it doesn’t seem like a copy of some other band.

Rockpages.gr: Let’s go to the musicians. Putting aside the fact that you knew the guys, that they play in similar bands and that Finland has a huge tradition in this sound, didn’t you think that it would be easier for you to have people close to you? Rehearsing and recording would be much different.

Gogo Melone: It’s true, but I wanted to get out from the borders of Greece. Taneli (Jamsa, guitars) and Saku (Moilanen, drums) play in similar bands so I thought that I could communicate better with them. Of course, distance affects a lot the output of this work and how quick a result might come, but maybe I needed the time to find out how all this works so in the future everything can happen faster. 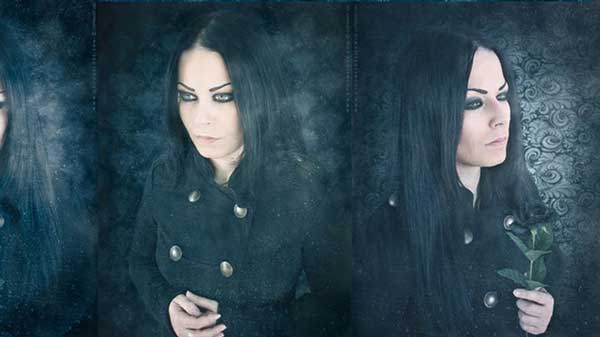 Rockpages.gr: Why did you choose “Thanatos Kyrie” for your video clip? Together with “Ave End” these are the most, let’s say, difficult songs from the album. Your single for example, “Forever Misery”, is a song that can be more easily heard from someone.

Gogo Melone: There was an idea to shoot “Forever Misery” as a video clip with the whole band in it, but we discussed it with our director and decided to go with something more atmospheric that would represent the album and the name of the band. We wanted to do something with a story in it.

Rockpages.gr: So, what is the story behind this song and where did you shoot the video?

Gogo Melone: We shoot it in Thessaloniki, specifically in Platanakia, a very beautiful forest location. We went there with a crew, some actors, my sister served as a director and I also appear in this. It took us three days to complete it. The story is based on the lyrics of the song. They speak of a person (of no specific gender) who is lost in his thoughts, in his feelings and in loss without knowing exactly where he is going.

Rockpages.gr: I think that this is the general direction of the album, correct?

Gogo Melone: Yes, there is no hope at all in the message of the album. It’s the constant struggle of emotions that someone experiences when he or she isn’t in good emotional condition. 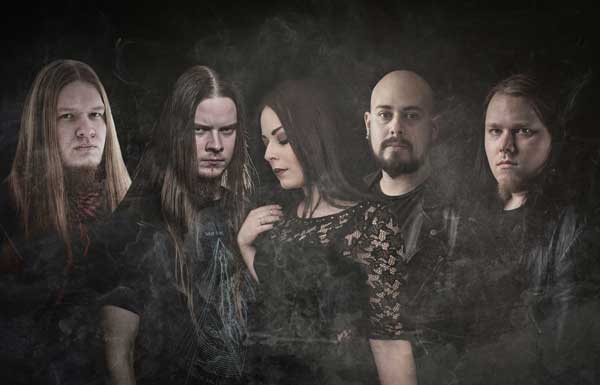 Rockpages.gr: How many shows have you played so far? One in Belgium comes to mind.

Gogo Melone: Yes, we haven’t played another one. It’s because I also sing with Clouds people think we have played more. For the time, there is a booked show in Bucharest, in a three-day festival (it’s Metal Gates, 16-18 November, with this year’s headliners being Rotting Christ, Draconian and Shining – Ed.). It’s a great opportunity for us.

Rockpages.gr: Any other plans, except that?

Gogo Melone: There is a European tour that we try to organize for 2019, but I can’t say anything more now because it’s all still under discussion.

Rockpages.gr: And what about new music and another album?

Gogo Melone: We have already started writing for the next release. At first, there will be an EP with four songs in 2019 and alongside we will work on the next full-length. Considering the atmosphere, it will be like a sequel of the first one. We don’t want to delay it for long, the debut took us three years to be released. Hopefully this won’t take so much time.

Rockpages.gr: This EP will be something like a promo for the next album, or it will have its own songs?

Gogo Melone: There will be no relation to each other. Other songs, totally different.

Rockpages.gr: Thank you very much for this interview. I wish all the best for the future of Aeonian Sorrow. The last words belong to you.

Gogo Melone: I would like to invite people to look up for us, listen to our work and if they like it to support this effort, because it happens with good intentions. And of course, support any band that struggle on their own to promote their music.

Note: Gogo Melone is a terrific graphic designer and her work can be found here, for any artist interested: http://www.gogomelone.com
Also, their merch has many nice stuff (cd, t-shirts, hoodie, pendants) for anyone who wants to support: https://aeoniansorrow.com/merch
And for the aficionados of vinyl: https://www.thevinyldivision.com/preorders 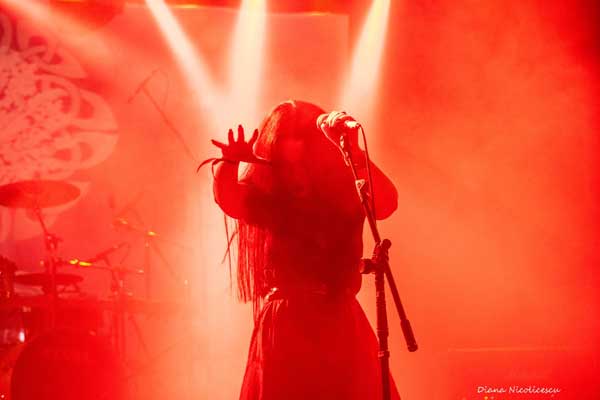