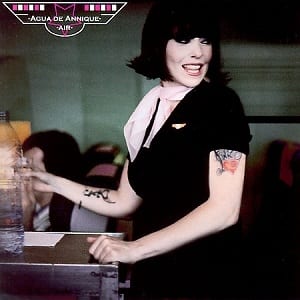 When in June 2007 Anneke was leaving The Gathering after thirteen years of significant presence in the band, everybody was talking about the beginning of the end for the band and Anneke Van Giersbergen’s personal stake for her future career.
Thoughts about both the above issues were justified by general consent.

The Gathering are going down ever since and the only thing we don’t know is when and where they are going to crash into something which will  stop them from falling even deeper. Anneke, on the other hand, is following a really quality and at the same time unbusinesslike path with indigestible hearings and a lot of good collaborations as a guest.

“Air” is her first try right after her leaving The Gathering and it’s nothing more than a statement regarding the musical trend she would follow, quite different from this of her former band. It is also the first of the two albums she released under the name Agua De Annique. This album can hardly be classified in any of the common kinds of music and certainly it has little to do with rock music and the entire spectrum it embodies. Someone might describe it as semi acoustic, with a sound the great Dutch adopted later on. In reality “The Air” may not be a dignified try synthetically but this ethereal and magic voice won’t let you deal with the music and orchestration of the album so much. Anneke’s melodies and performing abilities are such that beyond the totally personal style they give to ‘The Air”, they excite the listener without the need of any incidental music. This is obvious to her next   personal works, some of them even better in quality.

In no way will “The Air” remain in history as a classic album. Its offer in music lies on the way Anneke showed after she had denied a really promising career with a successful and distinguished band. “Play your own music, talk, talk with it, get yourself upfront, you don’t care about what’s going on out there” it seems that she says in “The Air”. So far nobody has done so well that’s why Anneke will always be unique.

The great Dutch will honour Greece with a tour in the beginning of the New Year in Kalamata,  Patra, Ahens, and Thessaloniki  along with Daniel Cavanagh of Anathema. I think that the term “music feast” suits these performances perfect.

(The album was released on October 30th by The End)