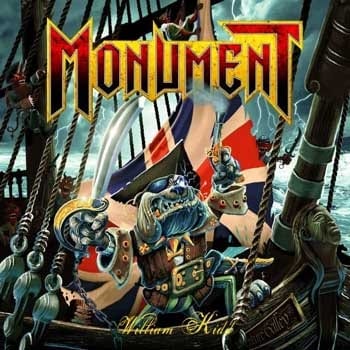 PRESS RELEASE: British Heavy Metal Band MONUMENT have released a new music video for ‘William Kidd’. It’s the second single off their upcoming album “Hellhound” including the Rainbow cover song ‘Long Live Rock ‘n’ Roll‘. The song tells the tale of the infamous privateer of the same name and finds the band in incredible form giving some of their best performances yet on record. The video can be viewed here:

The new single can be pre-ordered here: http://roar.gr/product/monument-william-kidd-long-live-rock-n-roll-7-vinyl-single

‘William Kidd‘ offers four and a half minutes of blistering, TRUE British heavy metal in the vein of what has so far made MONUMENT a sensation with fans across the world looking for the next great band to come out of the United Kingdom.

The album, consisting of 9 plus 3 bonus  tracks of pure British heavy metal, will also be available in a limited 500 copy Boxset version, red, yellow and orange marbled double vinyl and on black vinyl (9 tracks only). Twin guitar melodies, loud bass tones, thundering drums and soaring tenor vocals are all present in abundance. Lyrically, the album draws inspiration from a variety of sources like history, urban London life, the occult and personal relationships.

Tony Newton’s inclusion as the band’s producer has captured the band’s real sound for the first time and that sound is unmistakably British. To drop a few more names, the album was engineered by the band’s very own guitarist Dan Baune. Produced and mixed by Tony Newton (Iron Maiden – Producer of “The Book Of Souls: Live Chapter”) at Barnyard Studio, Essex, UK and mastered by Ade Emsley at Table of Tone Mastering.

All MONUMENT ‘Hellhound‘ packages can be pre-ordered here: http://roar.gr/?post_type=product&s=monument+-+hellhound