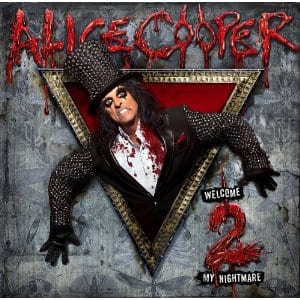 I wasn’t expecting such a disappointment from Alice… surely, releasing an album as a sequence to one of your best works needs qualities and balls that Alice Cooper has, but on the other hand it’s highly dangerous, and unnecessary.
“Welcome 2 My Nightmare” lacks the atmosphere, the feeling, and the quality of Cooper’s masterpiece from 1975. It borrows some musical themes from the original one, mostly “Steven”, while it wouldn’t be an exaggeration to claim that the best track is “Underture”, which is an instrumental medley of the original “Welcome To My Nightmare”. Unfortunately, neither Bob Ezrin’s return, or the original Alice Cooper Band in a couple of tracks managed to save the album.
Also, what is absent here is a concept, while the songs sound like a B-sides compilation from different eras. That way Dylan-esque, even Brecht-influenced “Last Man On Earth”, furious “Caffeine”, and “What Baby Wants”, gets buried. Plus, I didn’t understand why they used the tacky, so ‘90s, vocals distortion on “I Am Made Of You” that could have been a flash of light in the end of the tunnel.
I really wish I’d written a raving review for an artist with the influence, and importance of Alice Cooper, but no matter how many negative reviews this, or any other, album receives it can’t take anything away from the brilliance of its maker, which is one of the original figures in rock. But, unfortunately, it seems that Alice himself proved a victim of the “sequel trap”.