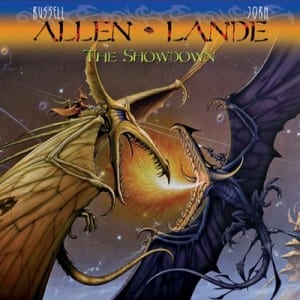 The Russell Allen and Jorn Lande project reached favourably in their third cd, titled ‘The Showdown’.  Both of them are very famous from their full time bands. Allen is fronting the progressive band Symphony X , and Lande at this moment is the frontman of the power metallers Masterplan, while he has passed from bands as Millenium, Ark, The Snakes, etc. These two excellent singers’ cooperation considered to be very succesfull, so once again they present us  a batch of twelve new strong songs, full of mesmerized vocals, heavier riffs this time and beautiful melodies. The album includes only good and very good songs, which become very familiar from the very first listen. As on the previous Allen/Lande cds, all the songs are composed by guitarist Magnus Karlsson (Primal Fear, Starbreaker), who also played the bass and the keyboards on the album. Among the best songs is the strong-in your face ‘The Showdown’, the epic ‘Judgement Day’ , the radio friendly ‘Never  Again’ and also ‘Bloodlines’, ‘The Guardian’ and ‘Eternity’. Another important element is the excellent album cover from the amazing Rodney Matthews, who in the past has worked in brilliant covers for Magnum, Asia, Praying Mantis, Nazareth, Diamond Head, etc. ‘The Showdown’ has released in three editions, the simple cd, the digipack one with bonus track and in a limited vinyl of 500 items worldwide. Therefore, the third collaboration of Allen/Lande and Karlsson finds them at the peak of their creativity and it is proposed not only to the friends of the melodic hard rock of the Frontiers label, but also in the power metal fans, since here the sound is heavier than the two previous cds.