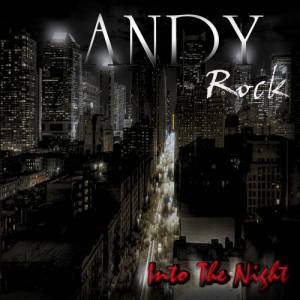 What…? You must be joking…! Really…? Is this an album written and recorded by a Greek artist in 2012? Wow!!! Andy Rock surely took us by surprise (and by storm) with his first solo offering. Andy is the guitarist of the brilliant Greek AOR outfit of Wild Rose and “Into The Night” is his debut solo album.
How would you feel if I told you that Michael Bolton (of the “Everybody’s Crazy” era) met Richard Marc (circa 1987-89) at the crossroads of Cher when she dominated with the excellent “Heart of Stone” record? Add to all these a heavy dose of a soundtrack of an American mid-80s movie and you get a pretty accurate picture of what “Into The Night” is all about. This is most definitely the best AOR work by a Greek band since Douglas’ “State of Rock” and Raw Silk’s “Silk Under The Skin” (both released more than 20 years ago). As a matter of fact, I still can’t figure out how Andy managed to deliver an almost analogue production that…beam us in time and place (most specifically, in 1985 and the East Coast of USA). The overall effort takes a whole new dimension if we take into consideration that Andy Rock played all the instruments (apart from the drums).
Don’t tell me that you want more arguments so as to buy this record!!! Are you still reading…? Go out there and get a copy of “Into The Night”…now!
Highlight: I’d love to hear more up tempo songs and less ballads by Andy on the next album.