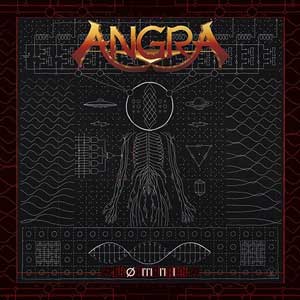 The last album of Angra (Secret Garden) was a pleasant surprise for me. With time and probably with dozen listens, the new album “Ømni” developed into something better than I thought. It’s more complex and difficult than “Secret Garden”. With “Ømni” the band showed progress and have written a progressive metal concept album which with the use of orchestra sounds more epic.

“Light of Transcendence” and “Travelers of Time” give the album a blazing start. Fast power metal tracks with uplifting melodies, heavy riffs and excellent guitar solos. Especially the second one is an interesting song. It starts off with percussion and a heavy almost djent-like riff which carry on through the verse, but when the chorus hits it goes full speed and becomes epic with one of the most memorable chorus of the album.

Οn “Black Widow’s Web” there is something I wouldn’t expect on an Angra album ever. For the first time you will listen to powerful death growls. They sound intriguing with the soft but quirky female vocals. They invited Alissa White Gluz to do the extreme vocals which combined with the clean voice of Sandy, a Sertanejo singer (popular music style in Brazil), it had as a result a heavy and intense track. The challenge did work and left us with a pleasantly complex and dark composition. “Insania” has a simple structure and it is my personal favorite. It is catchy and it creates an ethereal feeling with its dramatic melodies. Rafael Bittercourt’s baritone voice tries to create an emotional climax with a passionate singing on the folky power ballad “The Bottom of my Soul”. On the positive side is the addition of mandolin. Also, the orchestra on the track helps to reach its emotional peak.

Another fast-paced power metal track is “War Horns”. Strong vocals with punchy guitars and virtuoso solos are leading to a heavy riff that blasts your head. Guest on the “War Horns” is Kiko Loureiro.

The chemistry between guitarists Rafael Bittercourt and Marcelo Barbosa is unbelievable good. They brought influences from other metal genres which drives Angra to new paths, in a perfect mix of new sounds while retaining their identity. Even though I’m not a fan of Fabio’s voice, his Italian accent sometimes annoys me, I must admit that he did a pretty good job filling the demanding role as the new singer. His voice sounds as strong as ever, carrying the melodies and bringing in extra power to the heavier tracks.

“Ømni” appears to be a step forward and the using of orchestra is well balanced in songs which makes the sound more expansive. The unique mixture of styles is evidence that Angra can still offer an enjoyable album after two and a half decades.