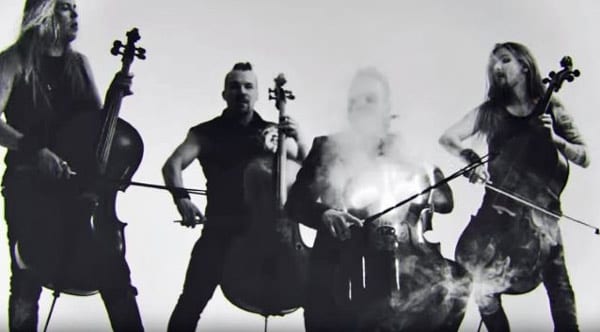 The date was 13th of June, 1996. The world of metal saw something for the first time. Four cello players made million eyes and ears to turn on them when they recorded “Plays Metallica By Four Cellos”. A purely instrumental album, in which the band used only one cello each to cover with exceptional way eight songs from the biggest metal band that ever stepped on this planet. At this point, I have to say that the inspiration behind Metallica’s “S&M” with the symphonic orchestra came through three different ways. The love that Cliff Burton had for this music, the “Concerto For Group And Orchestra” of Deep Purple and of course the debut album of the Finnish band. Not bad at all.

The impressive part is that each one of them plays different parts to create a complete and unique result. Bass, rhythm and lead guitars come alive through their fiddle sticks and soon Apocalyptica evolved from a project just for fan to a proper band. “Inquisition Symphony” that came two years after that, had more Metallica covers but also some in Pantera, Sepultura, Faith No More and their three first compositions. “Cult” came out in 200 with more tracks of their own, only three covers and for the first time, percussion and double bass.

Album after album, the band was putting new elements in their music. Slow, but steady, in “Reflections” (2003) there was violin, piano and Dave Lombardo on percussion. In “Apocalyptica” (2005) there were vocals and drums, in “Worlds Collide” (2007) guitars and in “7th Symphony” bass guitar. “Shadowmaker” that came out in 2015 was the first one for many years without any guests. The band played only with four cellos, drums and vocals.

The anniversary for the twenty years since their debut album, put them on a world tour in 2016 in which they played only Metallica covers. The first half of this show was dedicated to the album and the second half to all the other covers they’ve made since then (plus “Orion” and “Escape” for the first time) with the addition of drums. We had the luck to see them here on the 7th of April 2017 (nice gift for my birthday) for a memorable night. The demand for this tour was huge and as a result it had to put on a digital format. “Plays Metallica By Four Cellos – A Live Performance” is filmed in an amazing castle in Finland and spending time seeing it will worth your while.

2020 will mark a new period for the band, as they will release “Cell-0”, their ninth full-length work. Until then, we will have the chance to see them again, maybe for the last time, covering hymns from the mighty Metallica with their special way as this tour is coming to an end. A night in which anyone who will decide to come will see first-hand what unique and talented musicians they are all are.