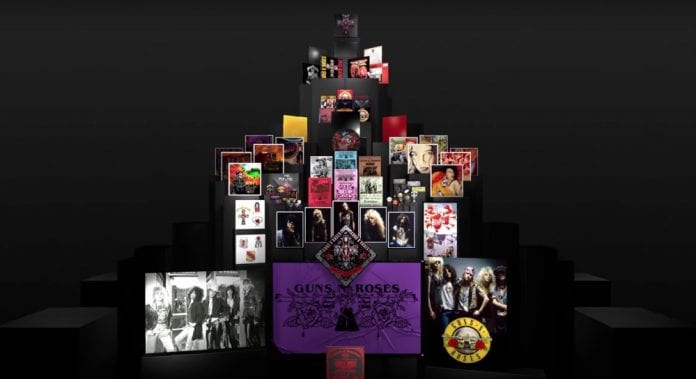 GUNS N’ ROSES will release a new version of its classic 1987 debut album, “Appetite For Destruction”, on June 29 via Universal Music Group. An unboxing video of the remastered and expanded “Locked N’ Loaded” reissue has revealed that it will include 73 songs (49 of which are previously unreleased) spread out across four CDs and seven 12-inch 180-gram LPs. In addition to a remastered version of the original album (presented across two LPs), there will be the band’s 1986 “Live ?!*@ Like A Suicide” EP, a second EP containing B-sides from the era, 25 previously unreleased recordings from the band’s 1986 sessions at Sound City studios, and two previously unreleased tracks from GN’R’s sessions with producer Mike Clink. The super deluxe version will also include a 96-page handbound book with unreleased photos from Axl Rose’s personal archive, 12 new illustration lithos visualizing each song from “Appetite For Destruction”, and replica memorabilia.