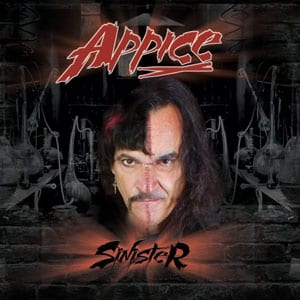 It is very difficult to make a preface for the name Appice. Carmine is the drum hero of drum heroes as he’s a main influence for drummers like Bonham while Vinny has played on historic bands such as Black Sabbath and Dio. Based on the above, there is a lot of anticipation and curiosity about how their collaboration will be translated into the album, which is graced with a parade of well-known artists such as Shortino, Franklin, Goldy, Hoekstra, McCauley et al. who give a little help to their friends. All the influences from the band these great musicians have played all these years are here: tracks influenced by King Kobra, Black Sabbath as well as some other bluesy tracks. “Monsters And Heroes”, the “cover” of Blue Murder’s “Riot” and “Suddenly” are excellent tracks. Quite remarkable are “Drum Wars” and “Bros In Drums” where the Appice brothers give a true drums recital. In general “Sinister” is a very good album that sounds very pleasant. In the case of the Appice brothers, our expectations were met.