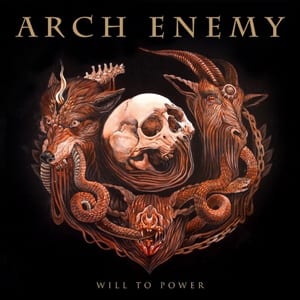 For quite some time I believed that Arch Enemy had to prove something with this album. With their latest releases not being good enough, considering their capabilities, they had years to give us something special. The band needed a restart and that came with the line-up changes. I think that worked perfect for them, as this record is something worthy for their name.

After all, this is a band that even if they have an extreme background they have managed to gain fans who would not listen to them in normal circumstances. They did it by adding more melody and classic heavy influences in their songs (Amon Amarth and Kreator are both similar examples) even if they lacked quality the latest years. So, how “Will To Power” is different? Better songs, so simple. The melodic guitar leads and solos have of course a major part in it, but this one has the vibe of an album that they worked hard on. We can talk about the more brutal songs like “The Race” and “First Day In Hell” or the more melodic and atmospheric ones like “The Eagle Flies Alone” and “A Fight I Must Win”. The outcome is the same, better compositions.

Also, the first big difference comes with “Reason To Believe”. A song with a style of a power ballad, in which Alissa sings mostly with clean vocals. Not that we didn’t see that coming, she stated her desire to do this sometime as she did in her ex-band, The Agonist. Another special song is “Dreams Of Retribution” with the harpsichord of Jens Johansson (Stratovarius, Rainbow) giving a neoclassical vibe. And maybe Amott stated that Loomis wouldn’t write music because he didn’t want to alter the sound of the band, but I can’t get out of my mind that this amazing player has something to do with some of the compositions.

In general, this is the best release from the band since at least a decade. I believe that the new elements in their sound have matched perfectly. Very good songs, the guitars are (obviously) excellent, Alissa takes no prisoners with her voice and of course the rhythm section is solid as a rock. This time, their upcoming live performance is something that I really look forward to it.