Archon Angel is gearing up for their mini Greek Tour with a sensational debut album in their luggage called “Fallen”. So, we grab the chance to get in touch with the band’s singer Zak Stevens so as to know more things about this new beginning in his illustrious career. It goes without saying that we made a trip down to memory lane by reminding Zak of the first Savatage show in Greece way back in 1996…what a brilliant show that was! Interview: Sakis Nikas 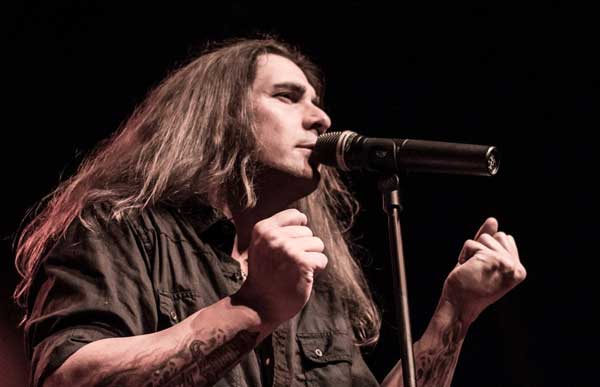 Rockpages.gr: Zak, what made you decide that this was the right time for a brand new start for you with a new band? I guess this is not an one-off project…right?

Zak Stevens: Aldo Lonobile and I worked together well on the latest Timo Tolkki’s AVALON album on Frontiers Records, so Frontiers asked us if we’d like to work together on a new project, and hopefully, a new band.  Based on the experience we had working on the “Return to Eden” album, I thought it would work out great.  So that’s what pretty much drove me to have this new band situation with Archon Angel.  I thought the timing was right and the music was right, so we proceeded with the formation of Archon Angel.  Things continued to flow smoothly as the music was written, and I liked the fact that it was all new music written specifically for Archon Angel and for my voice.  This was never designed to be a one-off “project”, as we have entered into a multi-album contract with Frontiers.  The idea from the start was  to have a real band that went out and played shows to support the album, and that’s what we have already begun doing.

Rockpages.gr: There is a clear concept behind “Archon Angel”. Who had the idea behind this modern day angel figure and how do you think it fits in the overall atmosphere of the album?

Zak Stevens: Actually, my wife Katherine came up with the name of the band, the overall concept dealing with the Archon as the central figure, and she also wrote the vast majority of the lyrics for the album.  I only wrote lyrics for the acoustic song ‘Brought to the Edge”, and bits and pieces in the rest of the songs here and there for detail and I had a few insertions to enhance the vocals from time to time.  I think having the songs detail the life, struggles, and emotions of the Archon throughout the songs really enhanced the atmosphere of the record.  This approach really helped us capture the necessary emotion for the vocals and it also in retrospect tells stories of what real people in our present day are feeling and experiencing in their own lives today.

Rockpages.gr: Let’s talk about some of the songs of the new record. Let’s start with the first single, the title track. It has a definite Savatage feeling of the “Edge of Thorns” era. What do you think and was it the first song that you wrote together with Aldo?

Zak Stevens: “Fallen” wasn’t the first song we worked on, but it was within the first five or six songs we wrote for the album.  I was very happy with the feel that Aldo captured on “Fallen”. It became one of the songs that is central to the overall story of the album, telling about the realization by the Archon that he is discovering himself as a completely new and reinvented human after dismissing himself as a mess and a failure when he was first identified by the Gods to be the Archon they needed to help the people of Earth.  The central character was a person of wealth and excess with a substance abuse and alcohol problem before the Gods informed him they would need him in their mission to save the earth.  In the beginning, the soon-to-be Archon didn’t want to be an Archon at all.  He tried running away, but soon had to accept the fact that he couldn’t run away from the Gods in a time of such need by Earth’s people.  It was at this time that he began to develop the special powers and talents needed to become a true Archon over time. 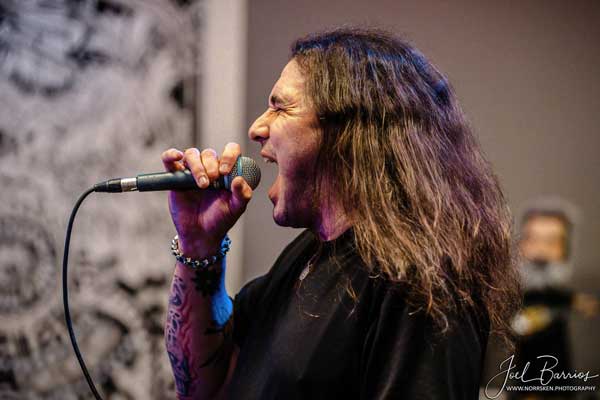 Rockpages.gr: Up next is “The Serpent”, again with a Savatage-esque riff (quite like “Damien”). Was it clear from the start that the classic Savatage sound would be the blueprint of the song structure of Archon Angel?

Zak Stevens: That’s interesting that you compare the song riffs of “The Serpent”  to “Damien”.  To this day I had never made that connection, but I guess it does have somewhat of a similar rhythm in the verses.  However, “The Serpent” has other more aggressive elements, vocal sound effects, and elements in the middle bridge section that is much different than any Savatage stuff in my opinion.  Overall, as the songs for the album got closer to completion, I did hear some tribute riffs that could be compared to Savatage, but I also heard a lot of things that sounded similar to lots of different  bands, including Queensryche, Dio, Black Sabbath, Whitesnake, and many reminders of many different bands here and there in the songs.  There was a part of me and Aldo and the rest of the writers that wanted to celebrate the music we grew up with on this album, but yet still introduce new, more progressive sounds that we can expand on with future albums as we move in new directions in the future.  I also know that Aldo is a huge Savatage fan himself, so this has played into the writing of the Archon Angel on his part and rightfully so.

Rockpages.gr: Nevertheless, there are also some Queensryche elements here and there (for instance on “Faces of Innocence” or “Under The Spell”). Do you agree?

Zak Stevens:  I would agree, but  maybe a bit more on “Faces  of Innocence” than “Under the Spell”.  I didn’t really hear that Queensryche influence so much on “Under the Spell”. I thought this one really had a sound of its own.  All the Archon Angel songs, even if they have reminders and influences from different bands, have their own twists and turns that make them stand own their own.

Rockpages.gr: In this time and age and with all the disastrous stuff that’s going on in the world, is an angel figure like Archon Angel more relevant and imminent than ever?

Zak Stevens: I think so. Events in the world seem so out of our control sometimes.  In many cases bad or scary events are  happening and there is just no justifiable reason for  them to be happening.. I think that’s what makes people so nervous these days.  It may just be that the news coverage is a lot better these days than in the past, but more things seem completely out of control.  A symbol or character like the Archon or even like Superman, Iron man, or any other protective character seems to be a lot more welcome and comforting these days.  We could use the help in the world now if only they were real.

Rockpages.gr: From your perspective, why do you think Trans-Siberian Orchestra is so popular, especially in USA?

Zak Stevens: T.S.O has found a way to have a mass appeal to multiple generations of fans.  They know the boundaries, but the writers, including the late Paul O’Neill, Jon Oliva, and Bob Kinkel, have certainly not been afraid to think outside the box and make Christmas and holiday music that pushes the boundaries of the traditional music that has been around for centuries.  There is a nice balance of classical holiday music and the newly infused rock/metal guitar-driven sound of the original T.S.O. compositions in the show.  There are literally fans from 10 years old and younger to 70 years old and older at a typical T.S.O show.  It’s amazing the age range of fans that we have.  Even the older fans react positively to the ever-growing Savatage song list that is getting infused into the T.S.O. show.  A lot of T.S.O. fans are just now getting the connection of the Savatage-T.S.O. relationship and the fact that T.SO. is a band that was created from Savatage, then became its own one-of-a-kind, record-setting entity in the USA. 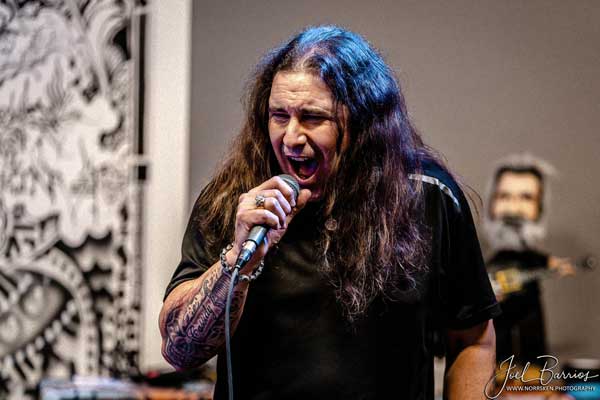 Rockpages.gr: Paul O’Neill left us way too soon. Was it a shock for you as it was for all the Savatage fans?

Zak Stevens: That’s so true.  Yes it was an absolute shock. And to me it was exactly like the feeling of when we got the news of Criss Oliva dying in that horrible car crash in 1993. I will never get over the passing of either of them.  Both events were absolutely shocking and devastating.  We are still learning one step at a time how it is to carry on in the musical world without the incredible talents of both Paul and Criss.

Rockpages.gr: So, for the record, is Circle II Circle on hiatus or should we expect new music anytime soon?

Zak Stevens: Right now everyone in CIIC is doing other things and it’s just really hard to get anything going on solid ground.  CIIC is not dead, but after 13 years and 7 albums, it’s run a complete course that we can be proud of.  Even still, it would take an opportunity that could pull all the members back from their current projects in order to get it going again.  Right now, CIIC is like a hibernating bear in the winter time.  It needs a recharge and an awakening.  Maybe that can happen sometime in the future.

Rockpages.gr: You are one of my favorite singers…I was watching some clips on YouTube from the recent 70.000 tons of metal cruise and I was absolutely moved and touched by the fact that your voice is intact and as powerful as ever. How was that show and what should we expect from your upcoming shows in Greece?

Zak Stevens: Thank you so much. I have always said that in order to get traction in the music business, you have to have talent, be surrounded by talent, and have some amount of pure luck along the way. So far I’ve been blessed enough to have a little of all three of those things through the years. I’ll keep on going as long as I am having fun and my voice is able to hang in there. The shows in Greece will be much of the same, celebrating music all of my years in the business from Savatage to CIIC to Archon Angel.

Rockpages.gr: Greece has always been a very supportive of your career. Your first time here was in a packed Rodon Club on the 21st of January 1996. Any special memories from that show?

Zak Stevens: Wow, that was an amazing show as I recall.  We had some technical things to overcome with monitors and the PA, but everyone worked together to make things come together and all of that effort made for an amazing and memorable show.  The crowd was amazing. It was one of the hottest shows temperature-wise that I have ever experienced.  All the guys in the band were pouring sweat and trying not to pass out from the heat! We made it through it and we really felt the love from the Greek fans and I really feel that they felt the love from us too.  Thank you Greece for all of the fantastic support and the great memories for almost three decades!!