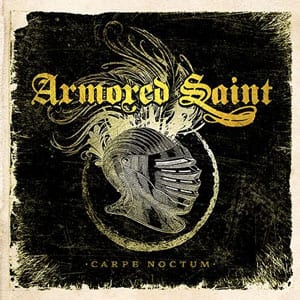 Armored Saint is firing on all cylinders after their majestic “Win Hands Down” album that was issued in 2015. Now they are offering a live album that captures their Wacken show that took place in the summer of 2016. I am one of those great supporters of the band and I really believe that Armored Saint is a constant force to be reckoned with. In their live shows, the overall performance is flawless and “Carpe Noctum” is the latest proof to the rule.

“Win Hands Down” is being represented here by the title track and “Mess” while the supreme (and personal favorite of the latter era) “La Raza” shines through a mighty rendition of “Left Hook From Right Field”. But in all honesty, “Carpe Noctum” really takes off when the band decided to perform classics like “Last Train Home”, “Reign Of Fire” and “March of the Saint”. The absolute highlight is John Bush’s intact voice while on a negative note we could point down the relatively short duration of the album that clicks in at the 38-minute mark.

All in all, this is really a gift to the die hard Armored Saint fans and it won’t be a target for the rest of the metal consumers out there (despite its undeniable quality).

Highlight: The title “Carpe Noctum” was selected by the fans after an online voting process.