“Win Hands Down” has made a great impression from the early days of its release. We met the two guitarists of Armored Saint Phil Sandoval and Jeff Duncan just before their show in Eindhoven, during the European Tour and we had the chance to talk about this new album as well as the band’s incredible feedback three decades ago. Interview by Dimitris Kazantzis

Rockpages.gr: The new album is called “Win Hands Down”. Who thought of the album title and does it have any special meaning behind it? 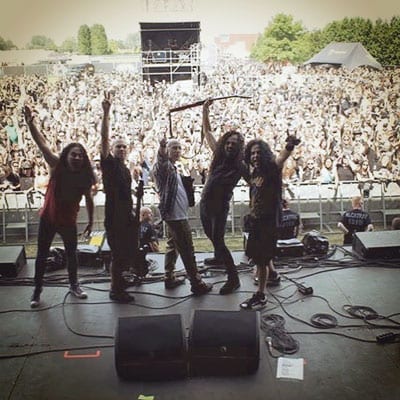 Phil Sandoval: I think it was the right, positive phrase for the record that’s why we chose it. Nothing too deep. Just a positive title to use this time around.

Rockpages.gr: This must be the first Armored Saint record with a photo of the band on the cover sleeve.  It is like a sci-fi meets western movie. Why you decided to use such an interesting cover sleeve?

Jeff Duncan: That was also kinda happened…I mean, since we decided to use the band on the cover sleeve, we said to ourselves “let’s make it different and interesting at the same time”. Again, it was just a creative thing…nothing that we thought about it. And you are right…this is the first time that the band is on the cover sleeve that’s why we wanted to make it memorable and not having five guys just standing there.

Phil Sandoval: Yeah, the cover is interesting…it has a certain feeling of a movement. It has those western elements in there…the saloon, the poker. I think it’s great.

Rockpages.gr: Joey Vera wrote all the music and John Bush wrote the lyrics of the album. I guess nowadays Armored Saint is not a regular band but more of a side project of you guys where you record an album when you have a time. Do you agree with this?

Jeff Duncan: I am not sure if this is a side project or just a matter of getting together and do something when it feels right. As far as the writing process goes, it just happened that way. With Armored Saint everything takes its natural course. But it’s definitely a band, something that we all love. It’s like a home base for everybody. Personally, I don’t consider a side project at all.

Phil Sandoval: I agree with Phil. Armored Saint is a home for all of us. Everybody loves the band and we gave 100% to it. We are all team players. John and Joey (Vera) is a very strong writing team; they have a great chemistry and everything works great for the band. It’s like Lennon and McCartney (laughs). Joey has an unbelievable ear when it comes down to sounds and all this production stuff. He hears certain things that I don’t even notice. All in all, we love the way the album turned out…I couldn’t be happier.

Rockpages.gr: The new album is more or less the natural evolution of “La Raza” witch came as a complete surprise five years ago. Were you happy with that record and you decided to follow the same musical path?

Jeff Duncan: I believe that “Win Hands Down” is different than “La Raza” which I believe was an experimental record for us. It was a very sophisticated record in terms of the overall writing process. “Win Hands Down” is a more classic Armored Saint record that includes some sophisticated elements of “La Raza”. Having said that, I think that “La Raza” was an important album for Armored Saint because it necessary for us to evolve musically and I think that the new album combines the best of both worlds: the classic metal sound of Armored Saint with the experimental, sophisticated elements of “La Raza”. The previous album was a steppin stone for Armored Saint in order to evolve musically.

Phil Sandoval: I believe that “Win Hands Down” is one of the best albums that we have done. It stands right beside “Symbol of Salvation” which I think is one of our finest efforts. 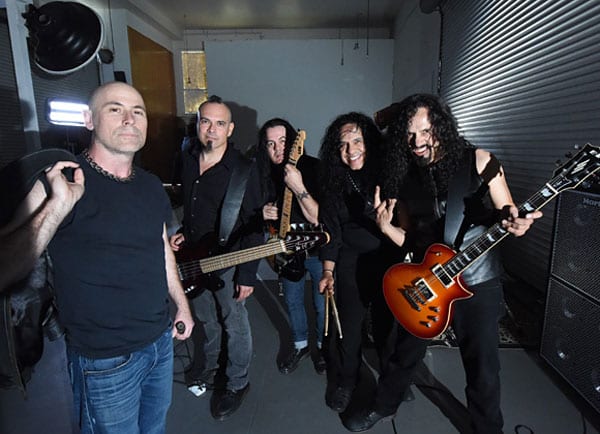 Rockpages.gr: You released back in the 80’s four albums in a row and yet you didn’t achieve the commercial success the you deserved. Looking back at those days, do you have any regrets and would you change anything?

Jeff Duncan: I came in the band

when we recorded “Symbol of Salvation” and we did just fine. Success is a relative thing…that’s my perspective. We are still here, we are still doing what we like and we are still making records. So I don’t have any regrets…of course, you look back on your life and think what would have happened if you did something different. But that’s quite normal. Whether we had major success in the past or not, the band would still be where it is today. The best thing is to keep making music although we are pretty slow at that (laughs). Of course, you want success and to see your work pay off but the most important thing is to be around and create new music.

Rockpages.gr: “March of the Saint” is regarded as one of the greatest heavy metal albums of the 80’s. Apart of the excellent songs, everybody remembers also the flashy image with the impressive outfits. What do you remember from that album and from that era?

Phil Sandoval: I remember that we got very sweaty but those were very happy days (laughs)! “March of the Saint” included all those classic riffs and there was stuff in there that went back to the time when we were still trying to get signed. But yes, it is one of the best albums of Armored Saint. 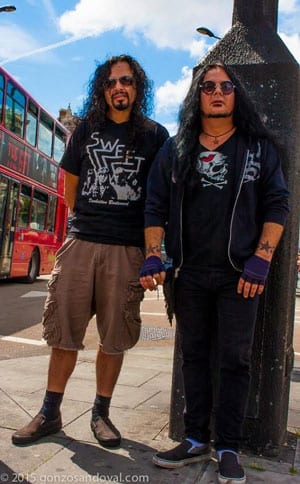 Rockpages.gr: You were part of the legendary Los  Angeles scene of the early 80’s. Armored Saint was somewhere in between the extreme metal scene with bands like Metallica, Slayer, Megadeth etc. and the glam scene with bands like Motley Crue, Ratt, Dokken etc.  Do you agree with this and by the way, what are your memories of those years?

Phil Sandoval: Armored Saint was very influenced by Judas Priest and generally we were influence more by the European metal scene of the early 80s. Like you said, we were somewhere in the middle of all that was going on in Los Angeles at the time. But we stuck to our guns and we persevered. Maybe, that’s why we didn’t achieve the success that we wanted because we were neither thrash nor glam. We were a European style metal band in Los Angeles and that maybe confused a lot of people. In the beginning we had Q Prime as our managers…Cliff Burnstein, Peter Mensch…the people behind Def Leppard and Metallica. Maybe, if we had gotten signed to a big label things could have been different to us. But again, nowadays you see bands like Kings of Leon or The Strokes that gain success for a year but were are they now? We’ve been in the game for 30 years and we are still very grateful that people still come to our show and buy our music.

Rockpages.gr: Fifteen years ago you played for the very first and last time in Greece. Is there any chance of coming to back to Greece and by the way do you watch the news on what’s going on in our country?

Phil Sandoval: Of course, we watch the news and what’s going on in Greece with the whole financial crisis. It’s a shame really…we’d love to come to Greece and play in front of our loyal fans. There is so much history…