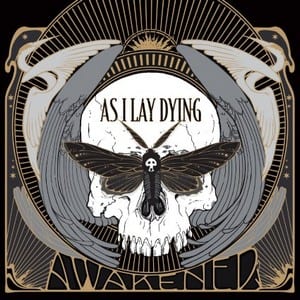 With their last two albums, ‘’An Ocean Between Us’’ and ‘’The Powerless Rise’’ in the American billboard top ten, it’s only logical that As I Lay Dying are considered one of the most important representatives of their genre. The band from San Diego, whose name refers to William Faulkner and Homer, has just released ‘’Awakened’’, another strong ensemble of solid songs that will satisfy its fan base.

The elements that can be found in all the songs are aggressive thrash riffs, breakdowns and transitions from Tim Lambesis’s screamed vocals to Josh Gilbert’s clean tone. Gilbert’s vocals are something that personally kept me from being enthusiastic about the record, because his vocal melodies in the choruses are in their majority predictable and uninspired. There are no major changes from their previous material, but that won’t worry the group’s fans, firstly because we are talking about a quite specific style anyway, and secondly, because As I Lay Dying are good at what they do, like shown in ‘’Resilience’’, melodic tune ‘’Whispering Silence’’ and the Lamb of God inspired ‘’Overcome’’, as well as in other tracks off ‘’Awakened’’.

As I Lay Dying