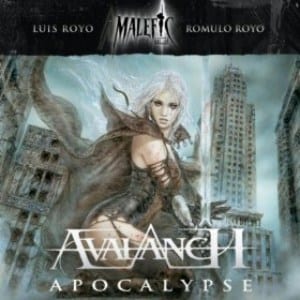 Avalanch come from Asturias – Spain, Northern Spain actually and they play one heck of MELODIC Metal, enriched by tremendous cinema bits and pieces and other Epic reinforcements. You will listen to their sound, mostly the guitars, and totally agree with me, they are full of sweetness. The boys keep making albums since 1997, this is their eighth project, they have also released live albums and DVD’s and all that Metal will allow… They tour Spain and South America and guess who the opening act is for The Scorpions next September in Mexico! And we’re talking about TWO Scorps shows!
Amazing, brilliant, fantastic Metal, featuring some Prog elements, too, mostly rhythm changes and demanding playing… Yet, what is about to win you over since min one is their beautiful melodies and the way songs are being portrayed. Now I’m listening to “In the name of God”… Man, this is one awesomic chorus! Next song is “New York stoner”, a bluesy/rocksome tune, which could easily be featured on the “Rocky” stoundtrack! Yes, they are that talented!
On this album, the mighty musicians are collaborating with Malefic Time, two world renowned artists, two exceptional painters, Louis and Romulo Royo; the outcome? Nothing less than an amazing illustration of their fabulous music. We are talking about Fantasy painting entering the notes and the lyrics, we are talking about a clinically organized attack.
KILLER ALBUM!