Axel Rudi Pell is a constant force to be reckoned with in the musical forefront. Ignoring trends and the current state of the industry, Pell continues to record studio albums on a steady basis without diverting –not even slightly- from his trademark style that has established all these years. It was, truly, an omission from our behalf that we haven’t done so far an interview with him but the release of his excellent new album “Into The Storm” was the ideal “excuse” to catch up for the lost time. Ladies and gentlemen, on the other side of the telephone line…Axel Rudi Pell!
Interview: Sakis Nikas

Rockpages.gr: Axel, where do you call us from?

Axel Rudi Pell: I am calling from my office in Germany.

Rockpages.gr: Alright! Let’s start with your brand new album “Into The Storm”. Once again, it doesn’t deviate from your familiar style and from my perspective it’s another great album that could have been really the natural evolution of any record of yours since “Oceans of Time”…what do you think?

Axel Rudi Pell: I agree with you…yes…I think it’s almost like the continuation of “Oceans of Time”. I believe that it’s the same mood and so far everyone seems to like the record. I am very satisfied with it.

Rockpages.gr: Right from the cover sleeve and the track list, the listener gets instantly the perfect image of what he is about to listen from an Axel Rudi Pell record. Is it really a case of “if something works, don’t change it”?

Axel Rudi Pell: Absolutely! You are right. I don’t like to change things because I really like the way the songs are coming up and the overall style of my playing. Everything worked fine during the recording of “Into The Storm” so there wasn’t any reason at all of fixing something. 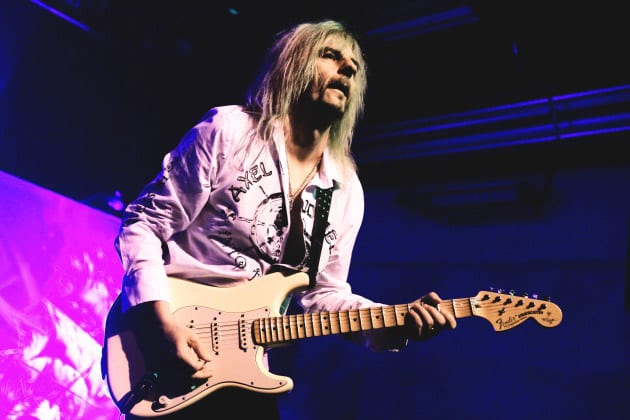 Axel Rudi Pell: There is not that different, you know…they are both professional drummers. When Bobby came into the studio and listened to the songs that I have written, he immediately said “that’s exactly the kind of music I like to do”. So, he was very comfortable in the studio and we enjoyed every minute of the whole process.

Rockpages.gr: I want you to be honest with me; did you ask him to share with you Ritchie Blackmore-related stories?

Axel Rudi Pell: (laughs) You know the first time I met Bobby Rondinelli he said to me “you want to know Ritchie Blackmore stories?”. I said “well, I know some of them” (laughs). You know everybody asks him about
Ritchie Blackmore because as you know he used to play with him in Rainbow. Of course, I asked him a few things but not that much…

Rockpages.gr: Staying on the Blackmore case, do you think that he will ever return to rock music with an album or tour with Rainbow or Deep Purple?

Axel Rudi Pell: I don’t think so…he is very happy with where he is right now musically. Personally, I don’t see any chance of him returning to rock music…maybe, he will do one more final thing in the future with various singers and players but I don’t think that it will be with Rainbow or Deep Purple. 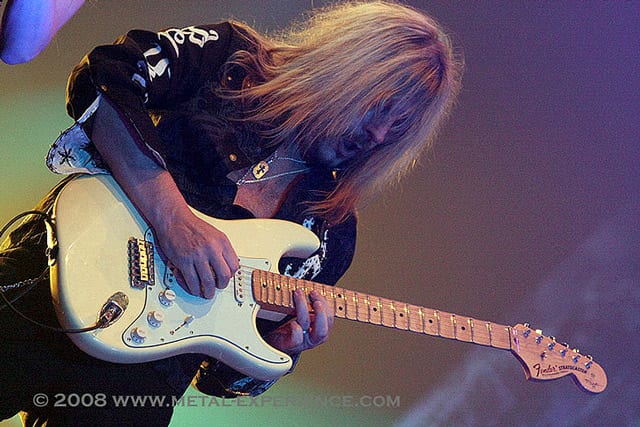 Rockpages.gr: You know, I always say that it’s too bad that we don’t have Ritchie in rock music but we still get to enjoy Axel Rudi Pell…

Axel Rudi Pell: (laughs) That’s right! I tried to carry on with the old Rainbow tradition and the way Ritchie recorded his best albums with Ronnie James Dio.

Rockpages.gr: Let’s get back to “Into The Storm”. Whose idea it was to cover Neil Young’s classic “Hey Hey My My”?

Axel Rudi Pell: Originally, it was my idea. I got the inspiration after watching a TV Series called “Sons of Anarchy” which is about a motorcycle club in USA. While I was watching the show, there came another version of that song…I think it was on the last episode of the 3rd season (ed. note: Axel is correct…it was on the last episode of Season 3) and this version had only the piano and the vocals. I immediately thought that it was a great idea to make a ballad; a slow version of this classic song. Of course, we did it with our own style…guitars, bass, vocals…I really loved the idea of turning a rock song into a ballad.

Rockpages.gr: I expected to see the majestic title track in the middle of the album and not in the end of it…

Rockpages.gr: I follow your career from the late 80s and I must say that Johnny Gioeli is my favorite singer from all that you have worked with. What’s your comment and what would you say is his main difference from Jeff Scott Soto?

Axel Rudi Pell: Johnny is not only a perfect singer but he is also a great guy to be with. I believe that he is among the Top 3 rock vocalists around the world. We get along really well and that’s the reason I’ve been working with him for more than 15 years now. He is absolutely my #1 singer. Jeff Scott Soto was also a very professional singer but I think that Johnny’s voice fits better to my style of music. 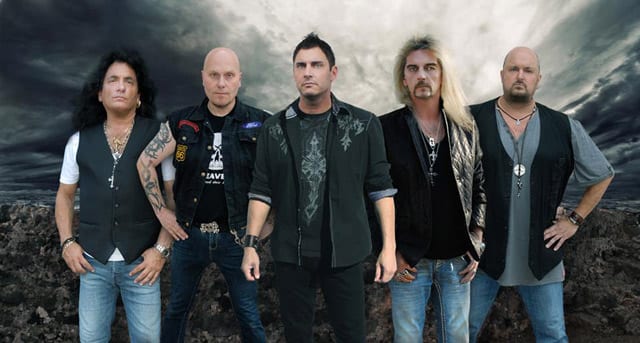 Rockpages.gr: Quite possibly, “Oceans of Time” and “The Masquerade Ball” are my favorite Axel Rudi Pell albums. In those records, there are such classics as “Carousel”, “Pay The Price”, “The Masquerade Ball”, “Voodoo Nights” and others. Take us back to that moment in time of your career…

Axel Rudi Pell: I love those two records! They are my favorite, too, but I must say that the new album is even better. I know that every musician seems to say the best things about his latest record but I truly believe that “Into The Storm” combines the best elements of those two records.

Rockpages.gr: My all-time favorite guitarist is Ritchie Blackmore, so you can easily gather that I love your style of playing but also the way that you compose your songs. The new generation of guitarists doesn’t seem to care for that neo-classical, melodic approach of the guitar. Do you think that this style of guitar playing will remain in the years to come?

Axel Rudi Pell: I am not sure…you know, there was Ritchie Blackmore of course…Randy Rhoads, myself and some others. But the thing is that the new heavy metal guitarists are not playing that style of music. They are more aggressive and not so melodic. To tell you the truth, I don’t give a shit! I am not listening at all to all those nu-metal bands.

Rockpages.gr: Unfortunately, traditional heavy metal is not that popular in USA. Have you talked with Johnny about the possibility of doing a tour there or is it financially not possible for you?

Axel Rudi Pell: Exactly…I talked to Johnny and Bobby about doing a US tour and they both told me that it’s not possible to tour there because it would be a financial disaster as you said. We would only play in front of 60-70 people and it doesn’t make any sense. That’s the reason we are not playing there.

Rockpages.gr: My last question is about Steeler; would you consider doing a special, reunion show just for the sake of it?

Axel Rudi Pell: Yes! As a matter of fact, we will do that this summer at the Bang Your Head Festival on the 11th of July…it would be a kind of a small Steeler Reunion show as we are planning to do this show at the festival billed as “Axel Rudi Pell & Friends”. Maybe, it will be a 30-minite Steeler set and the rest will be stuff from my solo career with guest musicians. But, it will be an one-off show…only a few songs and that’s it…I am doing this to celebrate the 30th anniversary of the recording of the first Steeler record. That would be the last ever Steeler show.

Rockpages.gr: Is there any chance of reissuing those Steeler records because they are very hard to find?

Axel Rudi Pell: I know they are very hard to find. There is always this problem with the rights of each album…there isn’t one single guy or label that owns the rights of all the albums. Some people own the rights of the first one some others have the rights for the second etc. You can’t put them together on one table…it’s too hard to get them.

Rockpages.gr: Any chance of visiting Greece on the second leg of “Into The Storm Tour”?

Axel Rudi Pell: Our booking agent always tries to get us gigs in every country around the world but as long as we don’t receive any acceptable offer, it doesn’t make sense to do a show in Greece. I just got the sales information today from my record label about the new album…there was no Greece on it! Maybe, that’s a reason why we don’t get over there…it’s the same case as USA…it doesn’t make any sense of playing in front of 50-60 people. 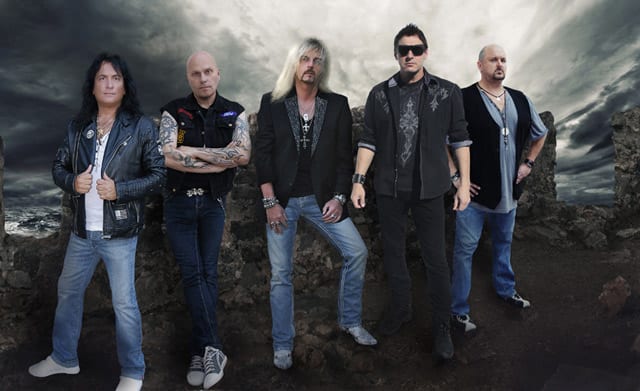