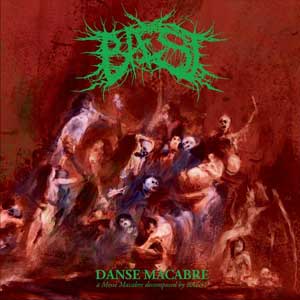 I always find it very interesting to learn about new bands from countries that don’t have a large tradition in the metal scene. Baest (“beast” in their language) from Denmark is a case like that. I know what you will think, they have some well-known bands, but you can’t say that they are a major force.

They were founded in 2015 and one year later they released a demo and “Marie Magdalene” EP. Their first-full length is finally here and it’s a death metal carnage. In order to find their sound, they didn’t travel very far. Sweden is a neighboring country after all. Influenced by all the bands who established the European death metal sound and, in my mind, they reminded me mostly of my favorite Bloodbath. Simon Olsen’s voice is quite similar to Mikael Akerfeldt and he is really amazing, giving the example of how the monstrous death metal growls should be.

In thirty (and a bit more) minutes that “Danse Macabre” lasts, Baest are doing a terrific job. For example, “Crosswhore” and “Messe Macabre” are devastating. The self-titled is maybe the best composition, that starts with acoustic guitars followed-up with interesting changes in rhythm. “Ritual” is a small acoustic intermission that shows a band who won’t hesitate to put a different touch to the final result.

Of course, the big problem of many groups who want to sound like this is the production. Luckily, the mix is ideal. You can hear everything clearly (but not polished) without losing the old-school feeling that they try to reproduce. The first effort of the Danish takes no prisoners. They are here to stay. Death metal with balls. And I don’t mean the ones used in sports.

For The Fans Of: Bloodbath, Grave, Vomitory