The quality of German outdoor festivals often depend on the weather as intense heat or heavy rains might prevent you from seeing or at least enjoying your favorite bands. Many witnessed the extremely heavy thunderstorms during BYH 2005 where hundreds had to be evacuated. As most visitors are camping, they fear that their tents might be blown away or drown in mud, so an unfavorable forecast makes you feel a bit uneasy. 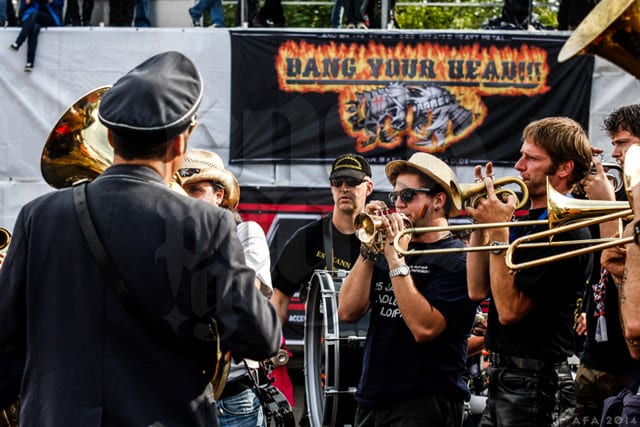 Prior to the festival on July 11 & 12 2014, it had been pouring for a week and there was no improvement in sight. So people packed waterproof boots along with raincoats and layers of clothes – and hoped for the tents not to be leaking.

Waking up on Friday, we were in for a huge surprise: Sunshine! There was no sign of rain, which was a great relief and immediately lifted the spirits. An estimated 15.000 people gathered at the festival site to enjoy a mix of 80s hardrock and metal. 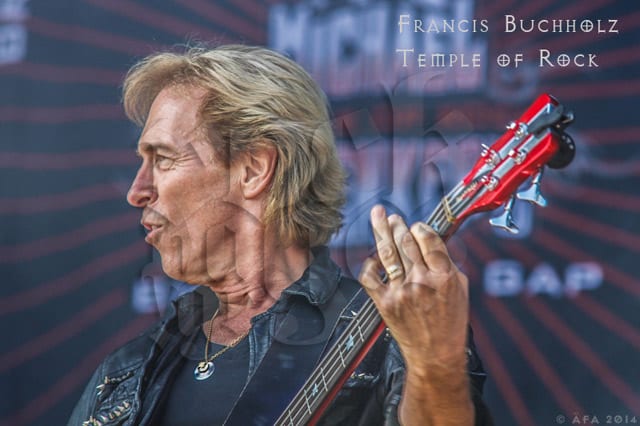 Michael Schenker invited Doogie White (Rainbow, Yngwie Malmsteen) on vocals as well as former Scorpions members Francis Buchholz and “Herman ze German” Rarebell for his Temple of Rock show. The band was tight and the set included the old Scorps classic “Lovedrive”. Schenker obviously did not forget how to pose 80’s style 😉 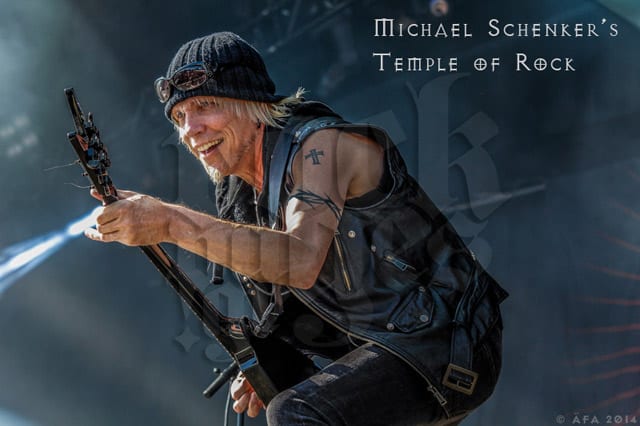 I had last seen Sebastian Bach in 1989, once with Skidrow at Festhalle Frankfurt, and another time at a spontaneous session at the Hippodrome in London. Back then this voice was in great shape; I recall being deeply impressed that Sebastian was outsinging Jon Bon Jovi. So I’ve had positive expectations and was looking forward to his show. At age 46 he’s still presentable, but unfortunately the show turned out to be one big struggle. I am not complaining about the setlist as it included many of his former hits (18 and Life, Monkey Business, Youth Gone Wild, Slave to the Grind). But his once brilliant voice was all squeaky. On top of this, his band was lame and did not form a unity, but left the impression of a bunch of hired guns. It was painful how he repeatedly missed the notes, his screaming made them sound like a lousy Skidrow cover band. Rest assured I am saying this out of pity, not out of spite, but Sebastian has lost his voice. Friends argued he was better at his solo shows, but this performance left me shocked and sad. 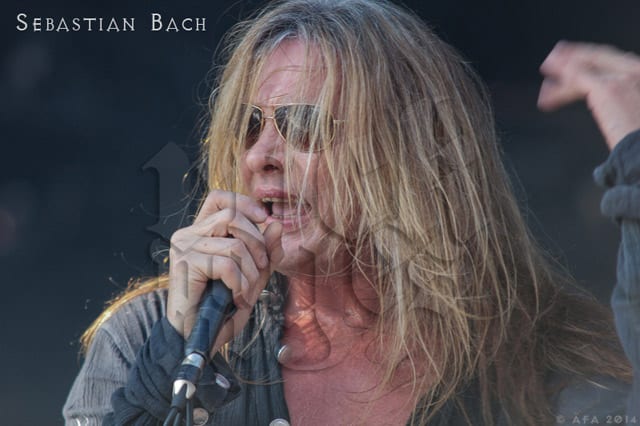 When guitar legend Axel Rudi Pell was announced as Friday’s headliner, I was not sure what to expect. I had already seen him at several festivals, and while his music sure is high quality from a musical point of view, I’ve got bored quickly. To make the three hour show more entertaining, Axel’s show featured a Steeler reunion as well as many special guests: Jeff Scott Soto (Journey, Yngwie Malmsteen, Talisman), Ronnie Atkins (Pretty Maids), Graham Bonnet (Rainbow), John Lawton (Uriah Heep), Tony Carey (Rainbow) and the above mentioned Doogie White. The singers took turns singing 2-3 songs each; later they brought two drum sets on stage for a drum battle, Bobby Rondinelli vs. Vinnie Appice. The confetti rain finale featured all performers singing “Smoke on the Water”. 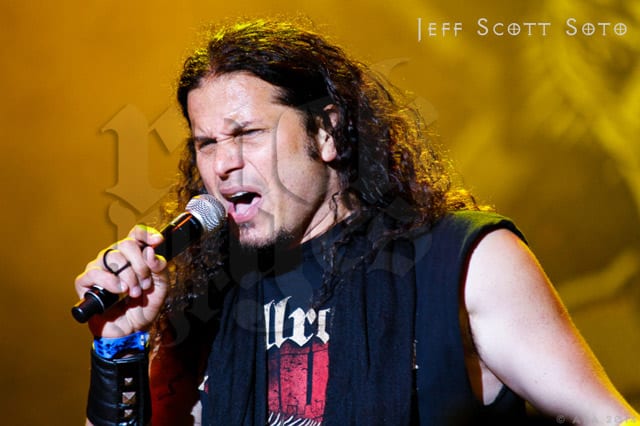 Axel and friends tried hard to make it a fun night. For sure it was a unique list of special guests, but apart from the many star singers and change in line-up, I still don’t consider him a worthy headliner. Maybe musicians get excited with the technical finesse or melodic arrangements, but the mostly mellow or mid tempo songs do not get the crowd going during the three hour show. By that time you just want to forget about your sore feet as you have been standing all day long. If it wasn’t for Jeff Scott Soto’s amazing voice, I might have considered leaving early, just like some of my friends did. Quite honestly, I’d rather see an outstanding grand band headline such a prestigious festival. How about Def Leppard next year? ;-). 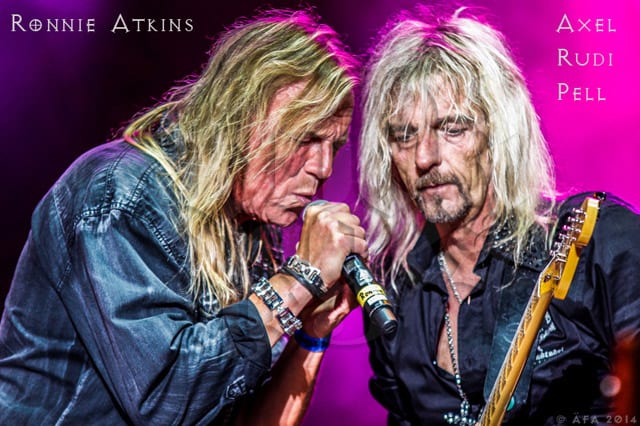 Shortly after the open air program had finished, the rain came pouring heavily, so people had to look for shelter. The indoor venue was not the right place to turn to for a melodic oriented crowd, as a Death Metal cover band is not exactly a good match. In previous years the hall remained crowded til 3am, but with this style of extreme music, only a few hundred stayed around. It was time to call it a night.

The rain was on and off all night long until the morning hours, so getting a morning coffee turned out to be an adventure. Worse, forecast warned of a major thunderstorm for the night. Out of precaution, festival management had already taken down the huge banners from the sides of the stage – which made everyone a bit uneasy regarding the main show at night.

Many were looking forward to the afternoon Stryper show as they have reached cult status. It was surprising that they were still that popular – many fans were singing along. Obituary were unlucky as their set was accompanied by heavy rain. 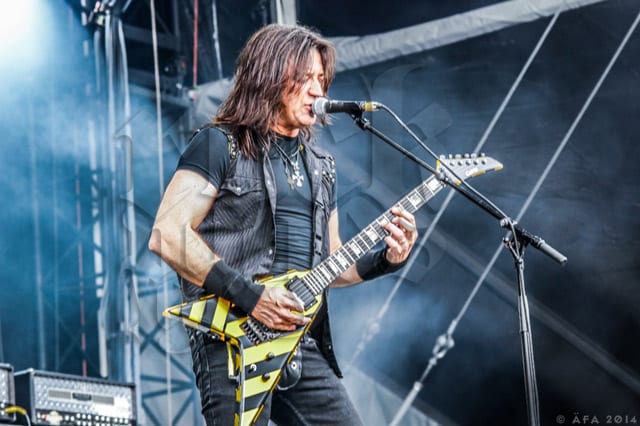 Next up was Unisonic, who experienced some minor rain halfway through the setlist. Ex-Helloween singer Michael Kiske is a fine example of someone who does not have to hide 25 years later. His voice is strong and shiny – not sure if his 17 year old concert break has preserved his pipes, but it sure is a pleasure listening to him. Some people later complained on Facebook about Kiske’s arrogant or even bored attitude on stage. But I am not sure if this is true. Maybe he’s just born to sing, but left insecure to entertain. I’ve witnessed the first private Unisonic show in 2009 and I recall Michael being all nervous to sing in front of a small audience. Though one should think that by now he has regained his confidence and has toured many major festival stages with Avantasia. Kai Hansen has joined him in both super groups, so listening to Unisonic brings back oldschool Helloween memories, specially with the covers “I Want Out” and “March of Time”. 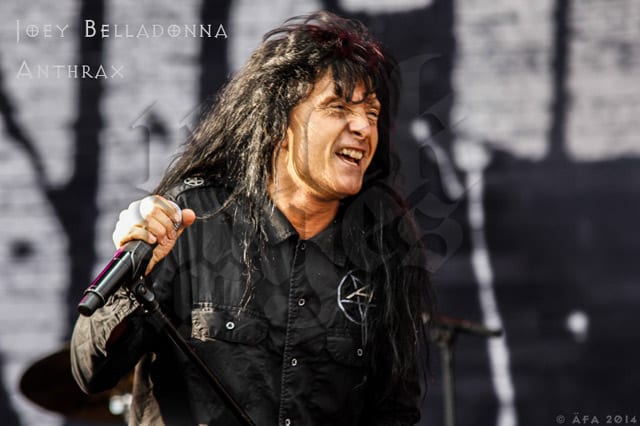 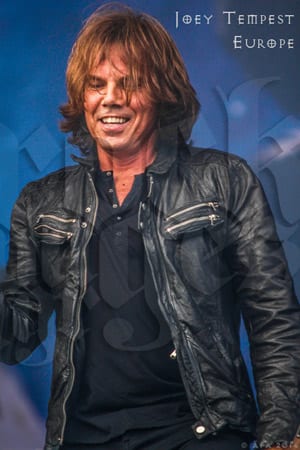 Scott Ian’s gray beard was the only indication that Anthrax has been around for more than 30 years. Joey Belladonna’s performance was enthusiastic and the band sounded tight, but most of all you can tell they are still enjoying their job and are not just into it for the money. They’ve played alot of oldschool hits (Indians, Caught in a Mosh, Madhouse, Antisocial) and got the crowd going.

When Europe entered the stage, my first thought was that the sound engineer forgot to turn up the volume. You had to get quite close to the front to realize they were already on. Joey Tempest’s voice was in decent shape and it wasn’t a bad show. I guess everybody loves “The Final Countdown”.

But in between Anthrax and Twisted Sister, Europe seemed misplaced. Anthrax should would have been the much more deserving co-headliner as their show was intoxicating.

I was excited to finally see a full Twisted Sister show as Queensryche made me miss most of the show when TS were headlining the 2010 edition of BYH. Having heard nothing but praise about them, I was
looking forward to Saturday night. And sure enough, they lived up to my expectations.

At 59, Dee Snider must work out like crazy as he is in good shape. Him and guitarist Jay Jay French not only ran all across the stage, but Dee dared to take off his shirt for the larger part of the night. All band members took part in addressing the crowd, and they provided many stand-up comedy moments that made you chuckle. The TS musicians came across like very down to earth likeable dudes. 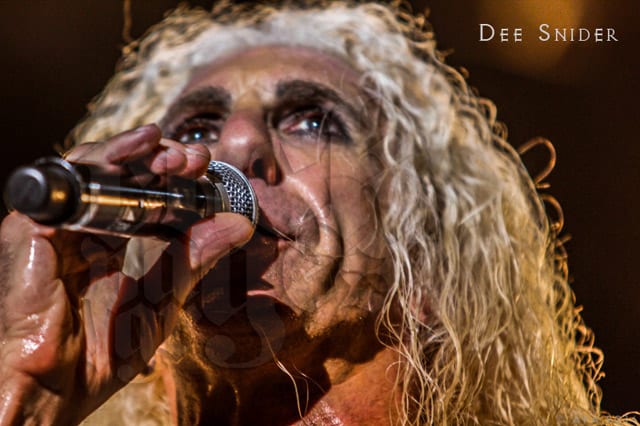 I was a bit surprised when they played “We’re not gonna take it” quite early into the set and did not save it for the Encore. But this way, the crowd kept singing the lines in between every song, which heated up the atmosphere. Their setlist read like the “Best of Twisted Sister” album: Burn in Hell, I Wanna Rock, Stay Hungry, The Fire Still Burns, Captain Howdy, SMF – Rock ‘n’ Roll heaven! It was just a pity that Twisted Sisters only played for 90 minutes.

Time flew by and I wished for a three hour headlining show like we had seen Friday night!

But, quite likely the best part of the night – unknown to us at the time – was that the show made us forget about the storm warning. It remained dry all night and we got to enjoy the entire Twisted Sister show without the slightest disturbance. We’ve later learned that in the afternoon, the management team had almost put the entire festival to a stop. There had been lightning and hail in nearby villages. Due to safety concerns, they were about to send everyone home. It was a miracle that, except for the rain, the storm spared the Balingen festival area. We were indeed very lucky! 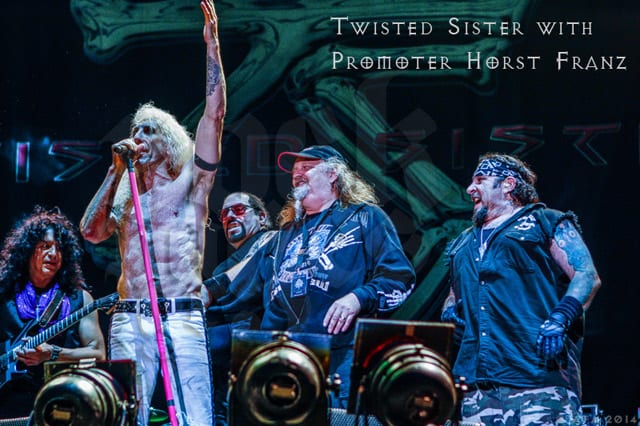 Again, Bang Your Head proved to be a festival that the mix of young and oldschool metal fans cherish and happily return to. Well established and organized, it managed to keep its cozy atmosphere. The friendly staff know how to smile and make you feel welcomed. Saturday’s finale ended with the usual fireworks and promoter Horst Franz’s good-bye message announcing his upcoming BYH plans.

2015 will mark the festival’s 20th anniversary! In order to guarantee proper celebrations, an extra day has been added. The previously two-day festival will be extended to a three-day festival – plus the optional warm-up show.

The festival will be held July 16-18 – check http://www.bang-your-head.de for details! 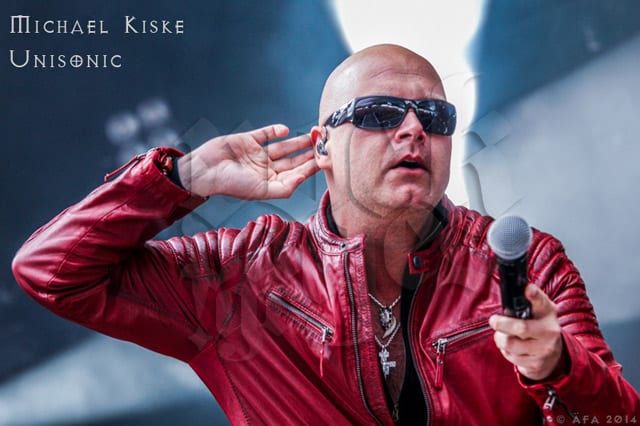 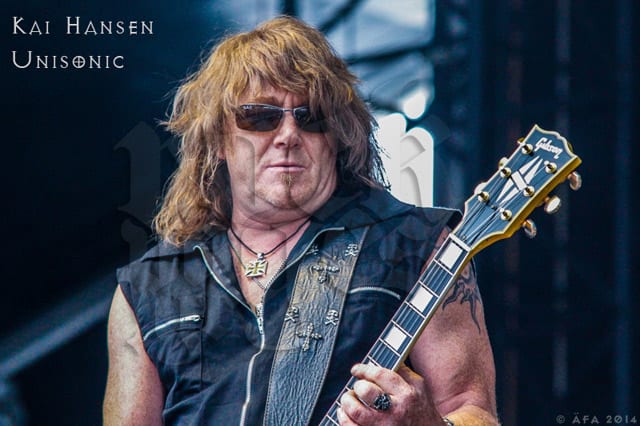 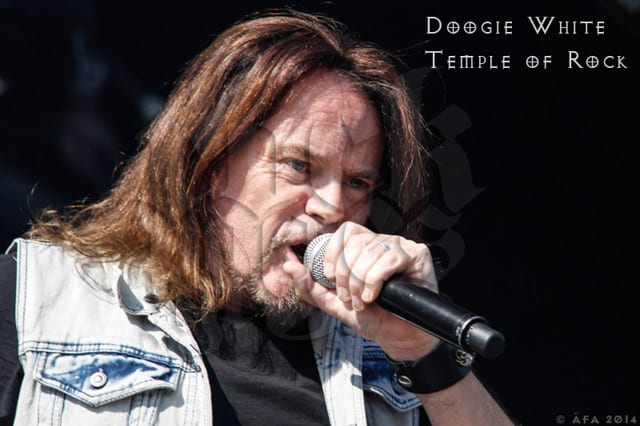 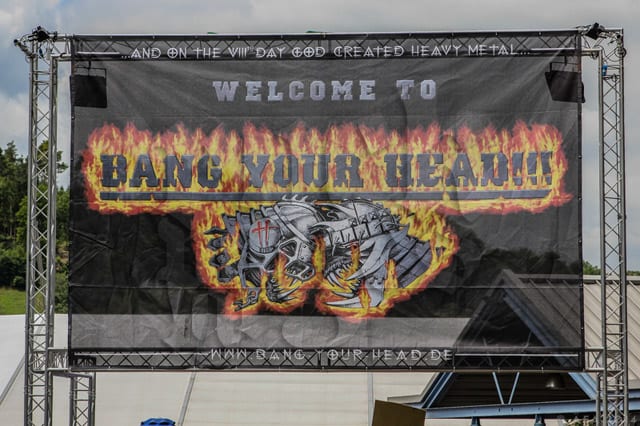