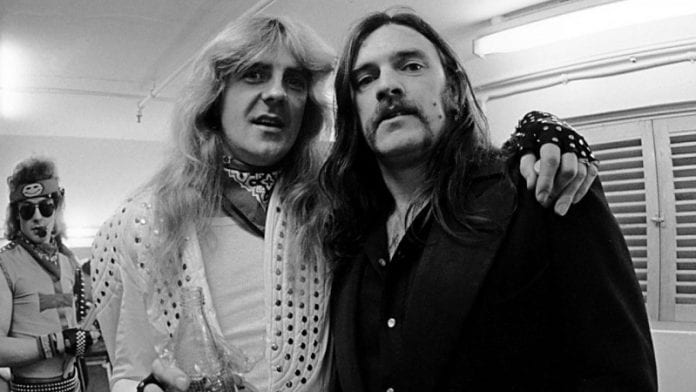 On March 11, Jay Nanda of San Antonio Metal Music Examiner conducted an interview with SAXON singer Biff Byford in San Antonio, Texas.
Asked if there are any tribute albums planned for his late friend, iconic MOTÖRHEAD frontman Lemmy Kilmister, Biff said: “There could be. I haven’t been asked to one. But I’m sure there must be something [in the works] right now. Hopefully it won’t all be superstar, platinum L.A. bands doing it. It would be great to get some of the British bands on there as well. But I haven’t been asked [about it]. I would do it, definitely. Any of them, really.”
He continued: “We’re connected with the early MOTÖRHEAD as well, ’cause we toured with Lemmy in ’79 on their ‘Bomber’ tour, which was our ‘Wheels Of Steel’ tour. So we’ve known all of the MOTÖRHEAD lineups; we’ve been friends with them all.”
Regarding which MOTÖRHEAD track he would like to sing on as a tribute to Lemmy, Biff said: “I’d like to do ‘Ace Of Spades’. We were doing ‘Ace Of Spades’ in Europe with Fast Eddie [Clarke, former MOTÖRHEAD guitarist] on stage, ’cause his band FASTWAY were special guests. So we were doing ‘Ace Of Spades’. And we’ve done ‘Ace Of Spades’ with [MOTÖRHEAD members] Mikkey [Dee, drums] and Phil [Campbell, guitar] a couple of times as well. So, yeah, I’m open to it. I loved Lemmy. He was a very good friend of mine. We miss him.”