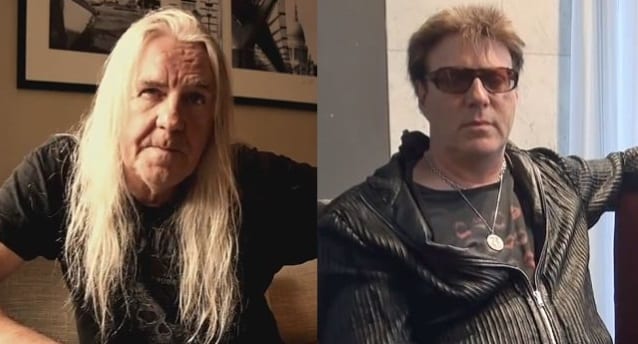 SAXON frontman Biff Byford has dismissed Jay Jay French as “a silly little man” after the TWISTED SISTER guitarist criticized other bands for continuing to perform well past their prime.
Addressing Jay Jay’s comments directly, Biff said: “I haven’t answered that guy — a silly little man, really. But he didn’t mention [IRON] MAIDEN, he didn’t mention SCORPIONS, he didn’t mention WHITESNAKE, he didn’t mention VAN HALEN. It’s just silly — not even worth mentioning. I mean, [TWISTED SISTER singer] Dee Snider is still touring, right? You know what I mean? C’mon!”
He added: “I just think it’s your personal choice, and it’s nobody else’s business, actually, what I want to do, or what a guitarist wants to do. If a guitarist wants to say, ‘I’ve had enough,’ then he’s had enough. And he goes home and… I don’t know… I don’t know what the guy, Jay Jay or whatever they call him… He’ll go and sit on the porch in his rocking chair with his pipe and slippers and fade away. We’re fucking Vikings. We don’t do that shit.”