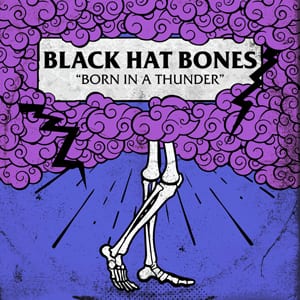 Long gone are the times when rock outside the big cities of Greece was a joke… thank God! Every year we listen to great stuff that don’t come from bands from Athens and Thessaloniki.

Black Hat Bones come from Leonidas and his 300 brave men home town, Sparta, and mind you they are not guarding the gates of fire. “Born In A Thunder” is their sophomore album and it’s actually pretty fucking good. It’s a healthy sample of evolution since everything is actually better, but most of all the songs. The compositions is everything for a album, always have been and always will be. “Thunderborn” sets the tone that the entire album will follow with its giant riffs and clever chorus. Following up is the explosive “Back With A Black Heart” that has something from the mighty AC/DC on guitars, but Black Hat Bones are not stuck in the past and the influences that more or less every band has, but they become more modern on “Strip Club” and mix old with new on “Eyes’n’Knives”.

The album is split in two with the slowest song, the trippy “I Am The Sun” that make the listener relax a bit before “Feast With Darkness” that pushes the pedal to the metal once again. Still, their ability shows on the swaggery “Realize” whose tempo is the medium one, something that’s always a challenge. I’d like the finish of the album a bit better, because I wasn’t impressed with “A Better Grave” and “Concrete Youth” and the same goes for the album’s outro “Six Feet Deep”.

This is a great album overall, an excellent release that proves we count on those Spartans as a force to be reckoned with in Greece.