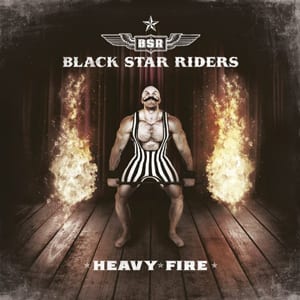 Black Star Riders are the natural sequel to the awesome Thin Lizzy featuring their former members who regularly release an album. “Heavy fire” is their third album, which is weaker than its predecessors, but it sounds very pleasant.

Personally, I find their first album unsurpassed. “Heavy fire” has all the elements that featured in the music of Thin Lizzy, such as nice melodies, traditional rhythms inspired by Irish music and of course the characteristic double guitars that influenced so many generations of musicians. The voice of Ricky Warwick (I’m a fan from the days of Almighty), which is raspy, swagger-y and very distinctive, stands on very good levels, giving personality to the melodies of Black Star Riders. Very good hard rock, from very good musicians, who were famous with big bands such as Alice Cooper, Ratt, Almighty etc. The production also is very clear and in high level.

Tracks that stand out from the first listening are “When The Night Comes In”, “Testify Or Say Goodbye” and “True Blue Kid”. I would say that Black Star Riders is a very good substitute for Thin Lizzy since Lynott went to play with the big heaven band.