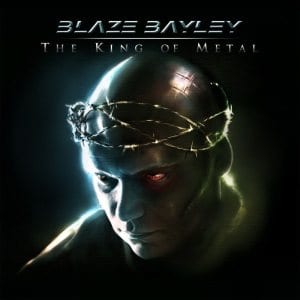 It sure sounds like a familiar album title, doesn’t it? Here’s another solo offering by the seemingly workaholic these days Blaze Bayley and all I can say –once again, really- is “listen without prejudice”. The truth is that since 2008, Blaze has come up with some brilliant studio offerings and luckily for all of us “The King of Metal” is not the exception to the rule but yet another bunch of sensational songs. Naturally, I didn’t expect Blaze to surpass “The Man Who Would Not Die” (the best Blaze Bayley album, in my humble opinion) but I was glad to see that he looked eye to eye with “Promise and Terror”.
With a new band (and a brand new look), Blaze chooses this time to move into a more traditional musical territory and leave aside the modern heavy & speed elements of the aforementioned past releases. And if we exclude “Fate” that brings in mind the atmosphere of “The Man Who Would Not Die”, the rest of the tracks display their own identity but at the same time bear the ever characteristic Blaze Bayley musical mark. Especially, “Rainbow Fades To Black” (a fitting tribute to the late R.J. Dio that kicks off with a similar riff to the timeless “Neon Knights”), “Judge Me”, “Fighter” are definitely the standout moments on “The King of Metal”. I must make a special remark, though, on the best song on the album, a wonderful piano-led ballad called “One More Step” with Blaze Bayley claerly showing off his emotions.
Last but certainly not least, the listener should pay close attention to the lyrics as Blaze doesn’t make any attempt to hide behind words and writes some of the most sentimental and truthful lyrics out there.
Highlight: I will say it once again…Blaze Bayley keeps on recording some excellent solo stuff…give him a chance and buy the album. You won’t regret it.