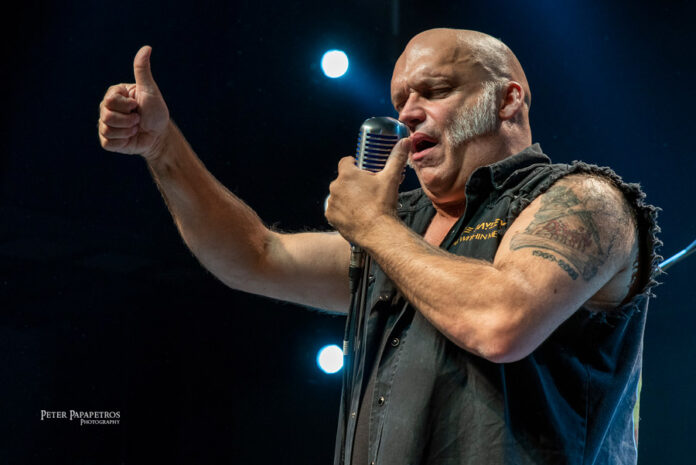 I am more than certain that even the most optimistic Blaze Bayley fan didn’t expect to see a packed venue on that Saturday night. Granted that the vast majority was there to listen to those underrated Maiden songs from “The X Factor” and “Virtual XI” but still…it’s really a remarkable fit to climb from the 50 fans who were present in 2009 during Blaze’s first headlining tour in Greece to the resounding number of 1000+ in 2022. That’s something that made me really proud as Blaze has been the recipient of harsh criticism without deserving it…

At 21:10 up came on stage Absolva; a quartet that usually opens Blaze’s shows as it is also his regular backing band. The British outfit celebrates its 10-year anniversary with a brand new album called “Fire in the Sky” and as it is easily understood they are quite experienced both on stage and in the studio. I gotta be honest, though…despite all their good-hearted efforts, their chemistry and the overall energy they failed to warm up the crowd mainly due to the fact that the songs simply didn’t cut it. They were really detrimental, balancing in between two worlds: the traditional Maiden-esque metal and its more modern approach. So, their 50-minute set left a lot to be desired but I believe that this band has still a lot to offer but they need to work on the songs. That’s the…X factor!

The time has come for Blaze who hit the stage at 22:20 amongst complete chaos and pandemonium as the opening notes of “Lord of the Flies” rushed through the speakers. The fans were in seventh heaven while Blaze was evidently having the time of his life as he couldn’t believe the fans’ reaction. You see, it’s not that common to be treated with underrated gems like “Fortunes of War”, “Judgement of Heaven”, “Virus”, “When Two Worlds Collide” etc. Even the three songs that Blaze chose to perform from his solo discography were more that fitting (especially the sensational “Pull Yourself Up”). Needless to say that there was absolutely mayhem down below the stage when Blaze played “Sign of the Cross”, “Man on the Edge”, “Futureal” and “Virus” although I’d personally preferred a better version of “The Angel and the Gambler”…oh well!

I am glad that Blaze played in front of such a big crowd last night. He rightfully deserves so. I know that next time around, when Blaze returns for a regular show, we will be fewer but still loyal; always there to support this honest artist. It’s a miracle that even now people seem to have a change of heart and reevaluate the Blaze era in the Maiden history. Congrats, Blaze Bayley!

Set List: Lord of the Flies / Sign of the Cross / Judgement of Heaven / War Within Me / Pull Yourself Up / Warrior / Fortunes of War / Virus / When Two Worlds Collide / The Clansman / Como Estais Amigos / Man on the Edge / Futureal / The Angel and the Gambler