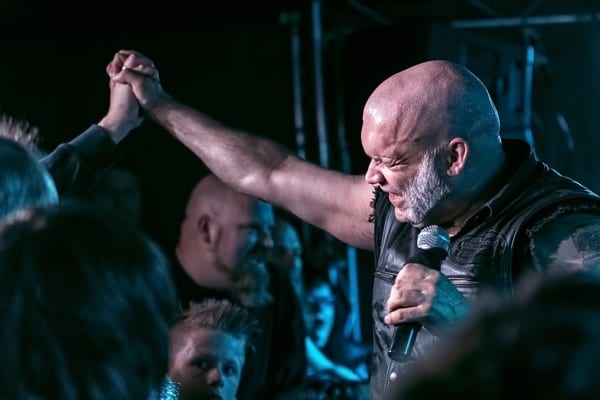 I can’t really say that I was expecting more or less people to show up at Kyttaro for this gig. Wednesday is surely an unusual day for a concert in Greece (you see we have our quirks) and Blaze Bayley I can’t say that’s a big enough attraction for metal fans in the year 2017. On the positice side though I have to say that the admission price was very low, thus more attractive for the people.

Within 90 minutes Blaze covered both my statements above. Having a lot of energy, just as his backing band, Blaze managed to set up an ideal heavy metal party, that was more than enough for those few who follow his personal career. But, none of us could swear that even half of them would exist if he haven’t been in Iron Maiden twenty years ago. From his Maiden era he played “Futureal”, “Virus”, “Man On The Edge” (with Maplerun on stage, what we were saying about a party), “Lord Of The Flies” and “The Clansman” pretty well I must add.

What I didn’t see at the show from Blaze and his band was an intention to do something more professional on stage. The singer looks like he prefers the club feeling, devoted to the few fans who follow him defying the rules of the music business, which is something he mentioned himself before the end of the show. It’s a pity from one hand, but honest on the other side. I am sure that the concert broke even with the attendance.

Before closing this review I have to apologize to the bands that also played Maplerun, Marauder and Hailsteel for not being there, as a personal matter forced me to get to the club just in time for Blaze.