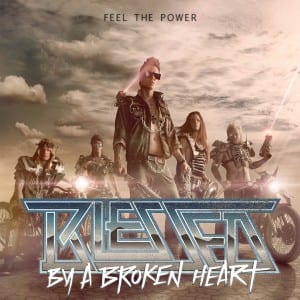 In 2003, a Canadian bass guitarist named Tyler Hoare gives birth to Blessed By A Broken Heart, who 9 years later release their 3rd album under the name “Feel The Power”; an album that I have listened to at least times from the moment I got my hands to! It’s been a while since I felt like that for a relatively new act, but they instantly captured me and entered my one of a kind group category.

The signs were all there in their previous release, entitled “Pedal to the Metal”, but this time they really nailed it. Attaching post hardcore and glam rock elements to their already mind-blowing groove, the sound of Blessed By A Broken Heart is full of powerful riffs and characterized by speed. The opening track, and one of my favorites, is “Deathwish”. Of a similar level are ‘Holding Back for Nothing’, ‘Skate or Die’ and ‘Innocent Blood’.

For those in a more ‘dance’ attitude, ‘Shut Up and Rock’ , ‘Rockin’ All Night’ , “Love Nightmare’ and ‘Scream it Like you Mean it’ are all already MUST hits!!! The highest point of the album is ‘Forever’, a song that supported by an excellent quality video production. Being a hit hunter, I undoubtedly believe it to be one of the top hits of 2012!

The only awkward, but not annoying moment of the record is the (rather unnecessary?) ballad “I’ve Got You”, that unfortunately has been placed quite early on the tracklist, temporarily spoiling the irresistible headbanging urge the other tracks bring fourth.

Enjoy listening! I have a feeling the discography and fame of the Canadian Blessed By A Broken Heart will grow bigger!

Blessed By A Broken Heart