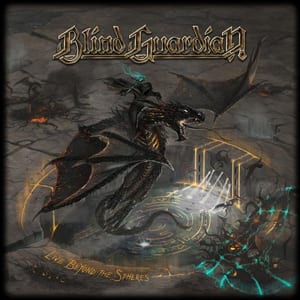 It seems that the number of live albums has increased in the last few years mainly due to the fact that both bands and labels are keen to invest less on pure studio offerings as the potential buyers are fewer through the years. In the case of Blind Guardian, it was never a case of statistics or a label’s decision as this was never a productive band and the release of a live album can be viewed as a perfect excuse of bridging the gap between two studio albums. Sp the question is: “should someone buy “Live Beyond The Spheres”?

The answer is probably “yes”. And we underline the word “probably” because in this time and age it has become increasingly difficult for someone to buy a live album if he is not a die hard fan or collector. But what we have in our hands right now is a collection of 22 songs that cover the entire Blind Guardian catalogue and were selected (by Hansi Kursch himself) out of 30 or so shows during the band’s 2015 European Tour. Needless to say that the production is crystal clear and the overall performance flawless. The tracklist is –more or less- satisfactory and well-balanced as one can pinpoint many classic songs and of course some new ones. Naturally, as it is the case in almost every single Guardian concert the majestic “Somewhere Far Beyond” album is criminally overlooked and it is only represented by “The Bard’s Song”.

All in all, this is yet another qualitative and remarkable release by the German outfit although it almost goes without saying that we are eagerly waiting for their next studio album (hopefully it won’t be this time as heavily produced as in the last couple of records).

Highlight: “Live Beyond The Spheres” comes out in a 3-CD and 4-vinyl package.