Another visit to Athens from the New York in typical rock’n’roll fashion band had surprises in store. Actually, as we’ve mentioned several times here before rock’n’roll has a lot to do with the element of surprise. If Blue Oyster Cult had left after “Don’t Fear The Reaper” this review would have been much different.

But, let’s go through it from the beginning… the show opened with Big Nose Attack an alternative blues duet, with two guys from Down & Out who had been the support act in big concerts in Greece, like ZZ Top, and Gary Moore. Personally, I wasn’t moved at all. I found the idea of a duet with guitar-vocals-drums shared by two people a bit passé afte the White Stripes – who I never liked anyway-, while in my opinion their chose as opening act wasn’t good for them. Despite all that they did manage to get the crowd’s sympathy and applause, while the venue was getting packed, which is actually the most important thing. 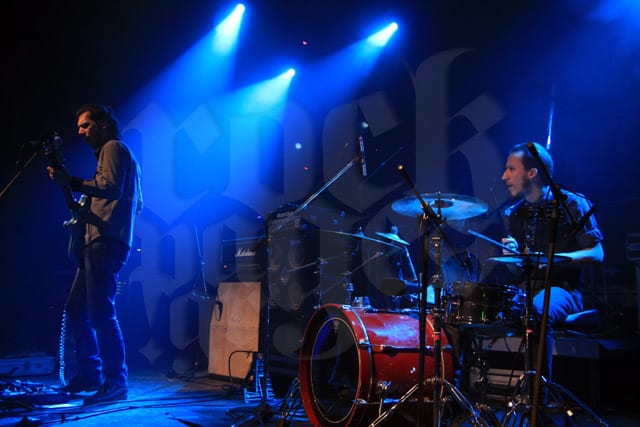 It was eleven o’clock when we finally first saw Buck’s Godzilla-bitten guitar on stage. Who know, maybe they hadn’t recovered from their jetlag yet, so it was natural for some wining to go round in a venue filled to the brim with a lot of youngsters, as well as the traditional middle aged punters who don’t miss opportunities like this one – and they know what they are doing! Blue Oyster Cult kicked off strong with “This Ain’t The Summer Of Love”, “Golden Age Of Leather” and “Burning For You” with the crowd singing note for note from early on, while the band was staring at them indulging themselves. “Club Ninja” was represented by the magnificent “Dancing In The Ruins”, while “The Revolution By Night” by “Shooting Shark”, which I guess satisfied the Cult’s connoisseurs. I never quite realize how we got to “Godzilla” , with an awesome intro line by Eric Bloom who said “oh, no there goes Mykonos”! Then, after a bass solo including a medley with songs Kasim Sulton had played on ( “I Love Rock’n’Roll” – Joan Jett, “Bang the Drum All Day” – Utopia, “Paradise by the Dashboard Light” – Meatloaf), a drum solo, and a Buck Dharma guitar solo  it was “Don’t Fear The Reaper” – time with the audience going nuts as usual, clocking at 90 minutes precisely. 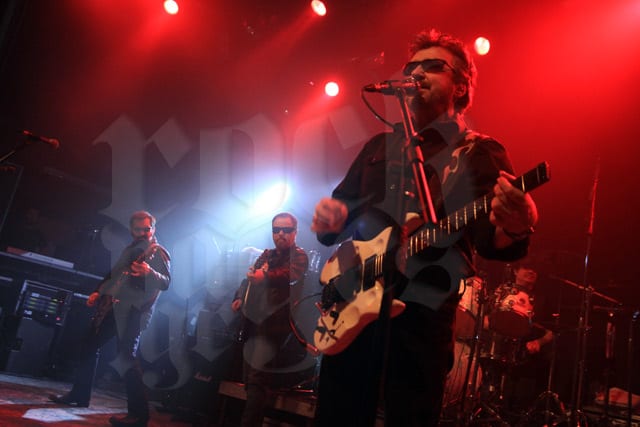 Now, if the show was over at that point we would have talked about a good, but typical performance by Blue Oyster Cult having played their regular set, like in their previous shows, which would have left everybody happy, but still lacking that extra something. Actually, from the moment I entered the club there was chats going whether they were going to play “Astronomy” or not, probably fueled by the relative Facebook event created by Rockmachine.gr. Also, despite the fact that Eric Bloom mentioned at some point that: “we don’t play here very often, so we’ll play what we are supposed to” left everyone puzzled and definitely unaware of what was going to happen. 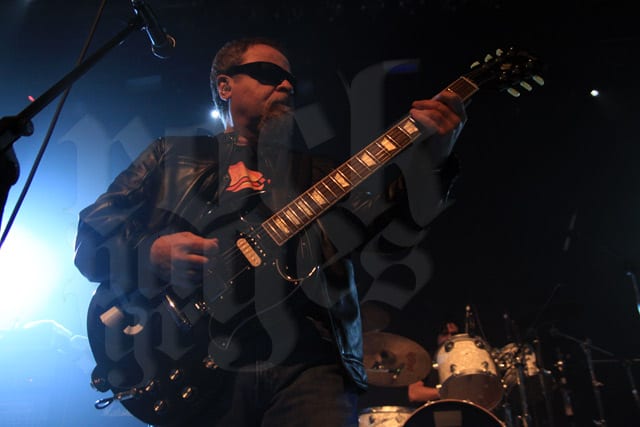 So, after “Don’t Fear The Reaper” was over, the band left, while the crowd was still there howling, shouting, clapping etc while the stage lights were still on, and no movement on stage. After almost five minutes Blue Oyster Cult are back out with a hero’s reception by the audience to begin their historic encore with “The Red And The Black”. Of course, the encore wasn’t meant to be historic because of “The Red And The Black”, or for “Hot Rails To Hell” that followed, but for the next one… Castellano sits behind the keyboards, Eric Bloom apologizes “we haven’t played that for years, and we haven’t rehearsed” and they play… “Astronomy”! A song that automatically made Greece the first country to be played for a long long time – you can ask any Blue Oyster Cult fan about that-, and that was played for the second time in Greek soil after the band’s second show in Athens in 2005 (we asked No.1 Blue Oyster Cult fan Makis Mavrogiannis about that, it’s official). What if Castellano, and Sulton didn’t know exactly what to play and the others were telling them the chords? The crowd’s passion, enthusiasm, and warmth was driving them. 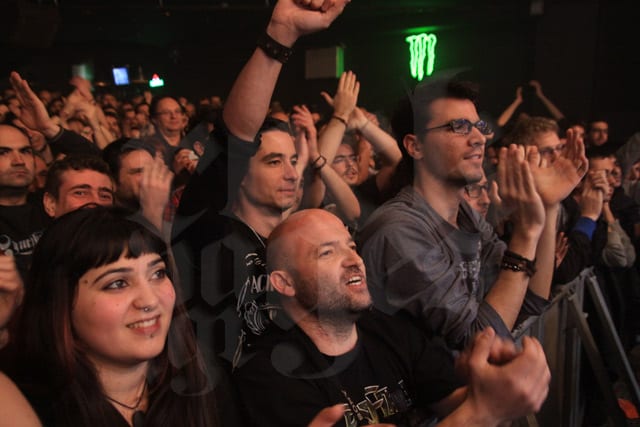 And “Astronomy” wasn’t the last song of the show, since the Blue Oyster Cult machine was on fire and unstoppable. So, they finished us off with “Cities On Flames With Rock’n’Roll” with Buck’s frenzy solos which completed a full 2hour kick ass show of perfect playing, amazing sound, and of course the big surprise of “Astronomy” which will make us remember it forever!

This Ain’t The Summer Of Love, Golden Age Of Leather, Burning For You, Dancin’ In The Ruins, OD’d On Life, Shooting Shark, The Vigil, ME 262, Then Came The Last Days Of May, Godzilla, Don’t Fear The Reaper

The Red And The Black, Hot Rails To Hell, Astronomy, Cities On Flame With Rock’n’Roll 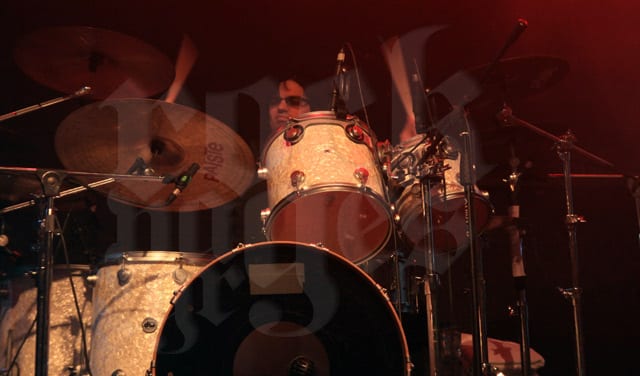 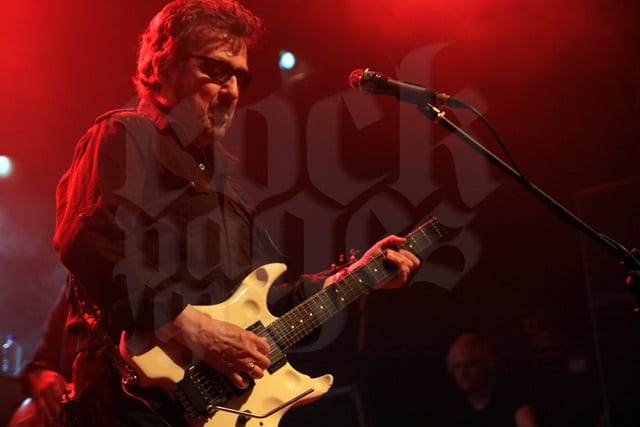 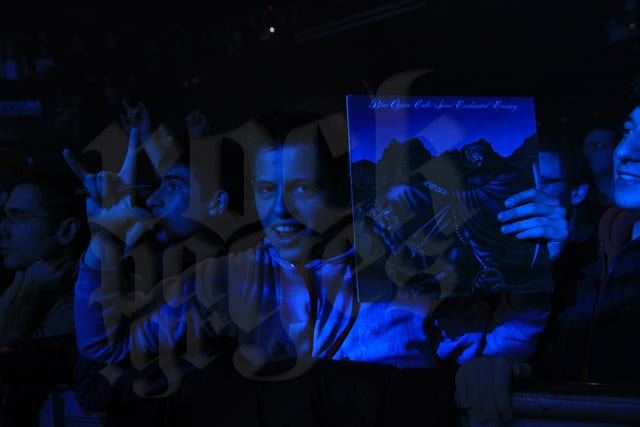