When the guys from the Official Bon Jovi Fan Club in Greece asked us to do a special feature on the album, I suggested that they should be the protagonists of this feature…not us! These are the fans that have listened constantly to this masterpiece and my only suggestion to them was to imitate their heroes and open their heart as Bon Jovi did way back in 1995. Enough of my rumbling…let’s turn the spotlight on the boys and girls from Bon Jovi Greece! 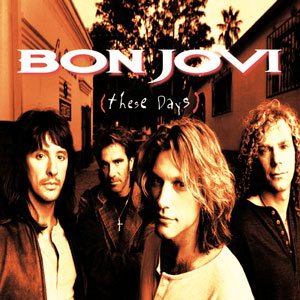 Bon Jovi’s sixth album is quite different from the previous five.  It is darker, more mature and musically stronger  with great vocals and amazing lyrics.

All the way from “Hey God” (which is about stories of people living on the edge of breakdown and despair resulting in a cry for spiritual help) and “These Days” (which is basically about homelessness and loss of innocence), to “Diamond Ring” (a beautiful ballad originally written for New Jersey in 1988 but finally made it to this album in 1995).

Jon and Richie a had great, unique and very creative  way of capturing moments, experiences and everyday issues (most of which we still face today) and turning them into lyrics.  It is these lyrics that prove the timelessness of their songs that the ability to touch our souls.

“These Days” is a favourite album…..a  MASTERPIECE….it’s part of the great Bon Jovi history.

I could easily say that this is by far the best album of the band; their most mature, darker and definitely the most poetic one. Music, lyrics and performances that were much envied in the years to come and ideas that remain as important and current as ever (after 20 years)! “These Days” was an album that didn’t match the sales of its predecessors but it triumphantly demolished Michael Jackson’s “History” from the top of the British charts while at the same time sold far more units in Japan in Europe than in the States. It was voted among the 200 best albums of the 90s and in the Top-50 of 1995. I cannot highlight single tracks but I can definitely I can pinpoint some of my favorite ones: “These Days”, “Something To Believe In”, “This Ain’t A Love Song”.

It has the wrong shape….let’s start with that.

This album shouldn’t have the classic round shape that we all know….it should have been something more specific…but we’ll get to that.

Historically all groups go through and seek their dark rock bluesy moment and that is what we, the die-hard fans, expect when we look for something more. The magical unveiling of this record is a luxurious pleasure that results in songs that are statements of the word “life”.

“Hey God” is a social cry of protest and plea for help. “These Days”, a quest of existence based on the humanitarian crisis and class imbalance of today…although angry lyrics leave you with a feeling of optimistic change and the return of values and ideals that are still intact. There is a spiritual need and a question of faith evolving from “Something to Believe In”. “All I Want is Everything” is about the dreams that we never give up on and that define us. “Something For The Pain” is a slow killer that comes in a deceptive and misleading packing.

For whatever gives us breath or takes it away…for whatever makes us whole or breaks us…love and pain, the most powerful connecting vessels of life in all their various forms. The songs “This Ain’t a Love Song”, “Lie to Me”, “Damned”, “My Guitar Lies Bleeding in my Arms”, “(It’s Hard) Letting You go”, “Hearts 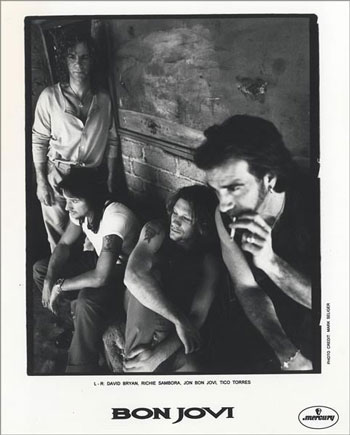 Breaking Even”, “Bitter Wine”, “If That’s What it Takes”, “Diamond Ring”, create a familiar feast of emotions. A reminder that love is the coronary artery and the loss of any form of natural law exists as a non-negotiable as is the inner strength to deal with it.

Also another dilemma….you cannot distinguish lyrics…or composition. The truth is that the band is already very successful and has its place in the music industry with their own characteristic stigma and top-selling hugely successful albums. It is as if they have been blessed by God.

The two ex-brotherhood partners (much to our regret) with some assistance from Child, wrote poetry!
In the most comprehensive, mature, dark and imaginative form! An ingenious conception that was sadly never repeated over the years.

After all this flow of emotions we have arrived at my first statement. This 20 year old album should have been diamond shaped because that is exactly what it is. Like the “ring” from the song or the shape of the legendary (known to us all) tattoo, and not in the sense of a super hero symbol. You choose…I already did…

June 19th is not an ordinary day…I remember it as if it was today… MTV announcing the release date of “These Days” with extracts from the “This Ain’t a Love Song” video clip and the audio background with the guitar riff from “Hey God”. The anticipation was driving me crazy and I remember counting the seconds to its release date. Almost a year had gone by since the release of “Cross Road” (a greatest hits collection celebrating Bon Jovi’s 10 years) and the super hit “Always” (with non-stop air play for many months) and it seemed like nothing could stop this band. Here we are 20 years later and although many things have changed, the love for this album has not faded one little bit. And how could it? Big loves can stand the test of time.

The first taste came from the album’s first single “This Ain’t a Love Song” which was released on May 30th, 1995 and it filled me with great expectations…amazing video (and as it turned out later on with the video of “These Days”, the band made a commercial breakthrough in the Asian market) which was released in 2 versions. I remember recording it on a video cassette so that I could watch it over and over again. An amazing synthesis with the magical touch of Desmond Child…poetic lyrics of a lost love and an interpretation full of emotion with Jon’s vocals at its best and Sambora’s guitar as well…it doesn’t take more than this to make it one of my favorite Jovi songs.

I am sure that when the cd came to Giannena (there was no internet back then and you had to wait for a phone call from the record shop to let you know that the album you had been waiting for had finally arrived) that I was the first who bought it, seeing as I was waiting outside the shop at 8:00 am. I was lucky that I wasn’t run over by a car on my way back home since I couldn’t take my eyes off my new cd…reading the song titles and wondering how each song would sound … and trying to guess which song would be a powerful rock song and which one a ballad. Looking at photos of the back cover, I realized that a whole new world was unfolding right in front of my eyes…it was pure magic my friends and unfortunately something that the kids of this day and age will never understand.

The album starts with “Hey God”…what can one say about Richie’s unsurpassed guitar riff intro, Torres and Hugh’s rhythm session, the amazing lyrics and Jon’s interpretation. The song was later released as a single… (Check out the live version at the MTV awards where the band is truly on fire!).  Continuing with “Something for the Pain” and “This Ain’t a Love Song” you can sense the change and the darkness… you can feel that the Jovi we knew is history… the party is over…the lights are dim…the band is here to talk about social issues and the dark side of the American dream. Jon, with his lyrics is closer than ever to Springsteen’s (his greatest influence) vision. “These Days” … read the lyrics and tell me if there is any other band that can approach these kinds of issues … a huge song where all the superlatives cannot begin to express what I feel when I listen to it. 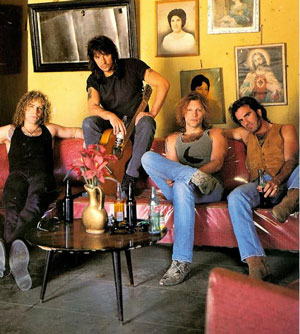 “Lie To Me” and its video clip, although “heavy”, is also one of my favorites. “Damned” gives a more upbeat funky sound with the great Richie on the guitars. “My Guitar Lies Bleeding in my Arms” and “(It’s Hard) Letting You Go” with their lyrics of sheer poetry bring chills up and down your spine. The band is light years away from all the rest with their creativity at its peak and they share this masterpiece with us. Just think that according to their statements, they were in a good mood while recording “These Days”…imagine if they weren’t! There are many spiteful people that would say that in the year of its release the music industry had already turned towards social issues and that in order to be on top of things, so did Bon Jovi. BUT THEY HAVE ALREADY REACHED THE TOP…HIT THE CEILING…THEY RECORD “DIAMONDS”…LADIES AND GENTLEMEN, THERE IS NOT EVEN ONE FILLER ON “THESE DAYS”!!! Even the B-sides are great.
“Hearts Breaking Even” is another intense song followed by “Something to Believe In”, a masterpiece that moves you like no other. It is one of Jovi’s greatest songs. I also love “If that’s What It Takes” and “All I Want is Everything”… and although

“Diamond Ring” is a special song it doesn’t move me as much as the rest. The album’s track list ends with the beautiful “Bitter Wine”.

“These Days” is Bon Jovi’s dark ride….the album for the skeptic fans of the band…the continuous pause that Jon started with “young guns” and continued with “keep the faith”, “I believe”, “fear”, “dry county” from the “Keep The Faith” album and peaked with the whole of “These Days”. It’s the album that separated Bon Jovi from the 80’s bands and with the “Keep The Faith” album moved them up to the top of the ladder to another category, placing them at the pantheon of the great music creators and gifting them with thousands of new listeners…. they won their bet against time.

A super successful world tour followed with sold out Wembley dates. If you’re looking for something more check out some unforgettable acoustic shows/hidden gems on YouTubelike their performance on the second floor of Tower Records in Glasgow with the fans below in a frenzy.

It’s worth finding and buying the special edition of “These Days” which has plenty of demos …”fields of fire” being one of them and the live performance of “I don’t like Mondays” with Bob Geldof.