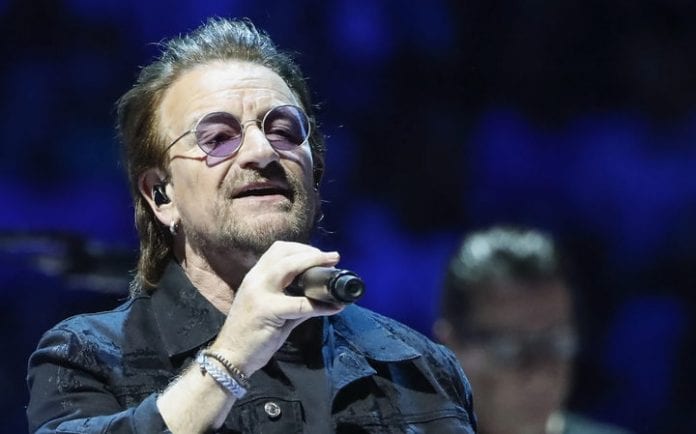 U2 abandoned a concert after five songs in Berlin, Germany last night (Sept. 1) after frontman Bono suffered what was described as “a complete loss of voice.”
He’d previously commented on the fact that smoking is allowed in some parts of the Mercedes Benz Arena, where they’d also performed the previous night. After singing “Red Flag Day,” he told the crowd: “This is like being in a giant cigar. I’ve lost my voice and I don’t know what to do. I was singing like a bird about 10 minutes ago. I don’t know what to do. I’m sure it will pass.” The band then went into “Beautiful Day,” but Bono was clearly struggling to perform.
Apologizing to the audience, he talked about the possibility of canceling the show and returning in the future to make it up, then said: “Let’s break for 10 minutes.” He and the band stepped off the stage, but they didn’t return. In a statement released later on their website, they said: “We’re so sorry for tonight’s cancellation. Bono was in great form and great voice prior to the show and we were all looking forward to the second night in Berlin, but after a few songs, he suffered a complete loss of voice. We don’t know what has happened and we’re taking medical advice. As always, we appreciate our audience’s understanding and all our fans’ support in Berlin and those who traveled from afar. We will update you very soon.”