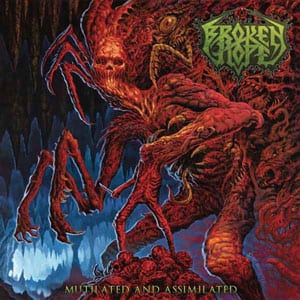 Broken Hope of Chicago, Illinois are veterans of the scene who started the right time to play death metal. They managed to make a good name in the underground, but they didn’t achieve something more even if their first albums showed a band with potential. They disbanded for about a decade and now they release the second album of their new era (and seventh in total). An album that follows an excellent series of records from many old bands during this year. In simple words, It’s a killer one.

I don’t have to analyze it in depth, it has no fillers, it grabs you from the face and doesn’t let you relax at all, not for a single minute. Production loud as a dynamite, riffs that owe a lot to the big Slayer school, drums that crush bones and vocals from a throat that you wonder if it belongs to a human being. Simple ingredients to create a monstrosity that will make happy the fans of this genre. It should be noted that Jeremy Wagner, founder and guitarist of them, bought two years ago six of Jeff Hanneman’s guitars, so the album was recorded with one or some of them. Broken Hope are doing their duty and take no prisoners.

This album comes along with two gifts. First, a tribute track to their debut “Swamped In Gore” that was released in 1999 entitled “Swamped-In Gorehog”. Second, a DVD from the show that they played two years ago in Obscene Extreme Fest in Czech Republic. This record needs to be consumed while still fresh. As this guy from “The Carrion Eaters” video consumes so happily his food.

For The Fans Of: Cannibal Corpse, Suffocation, Dying Fetus