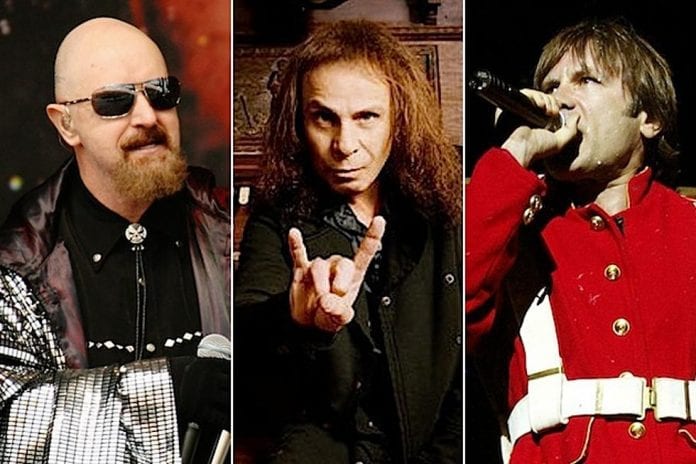 Bruce Dickinson says that Ronnie James Dio was originally supposed to take part in a proposed project called THE THREE TREMORS before he was replaced by Geoff Tate.
It was announced in 2000 that the QUEENSRŸCHE frontman would be joining Dickinson and JUDAS PRIEST singer Rob Halford in the all-star group, which was slated to record an album’s worth of material with Dickinson’s solo guitarist and Roy “Z” Ramirez.
That same year, Tate and Dickinson joined Halford onstage at the latter’s concert in London for a rendition of “One You Love To Hate”, a song written by Halford, Dickinson and Ramirez that was featured on Halford’s “Resurrection” album.
But in a brand new interview with the “Trunk Nation” show on SiriusXM channel Volume, the IRON MAIDEN vocalist said that Dio was his original choice for the third-singer slot in the since-aborted project.
“I was, like, ‘I am not gonna do this without Ronnie,'” Dickinson recalled. “And Rod [Smallwood, IRON MAIDEN’s longtime manager] was, like, ‘I don’t wanna use Ronnie. He’s too old.’ I said, ‘What do you mean too old? Are you kidding me?’ I said, ‘He’s a legend.’ He said, ‘No. We should use Geoff Tate.’ And then we had a meeting with Geoff Tate, and then I said, ‘No. It’s not gonna work.’ And so that was that.