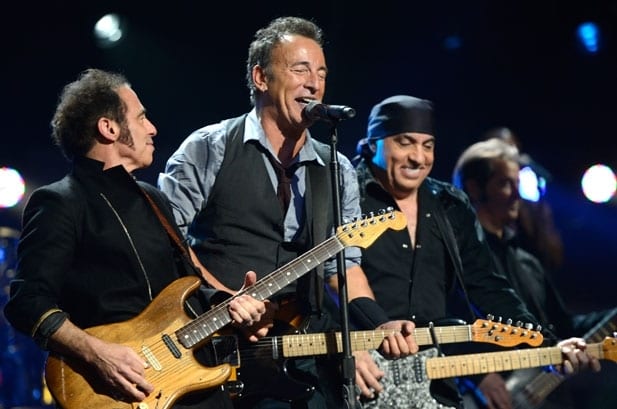 That was the third time that Bruce Springsteen and the E-street Band played in Stockholm and the fifth in Sweden for this tour. All five times, the venue – in this case the Friends Arena in Solna, a Stockholm suburb – was packed, a phenomenon that I haven’t seen any other musician accomplish. It’s interesting that several people I met in the train to Stockholm after the show or on the way back to Gothenburg the next day, had already watched the two shows in Gothenburg’s Ullevi, last summer.

The concert had an amazingly fast tempo. Songs were coming one after the other with almost no pause in between, so quickly that I believed that the show was for some reason delayed and they had to finish all the set in the prearranged time. I got to know though that both previous concerts in Stockholm, on 3rd and 4th May were in the same style. Despite the apparent “hurry”, the total duration of the show was more than three hours. The second kind of surprise was that these three hours were full of hits and not b-sides, as I would expect from the third live in the same city.

For the actual performance of the band, there are no words to describe the feeling. Springsteen was moving around the stage all the time, singing like it was his last time, and with every chance standing and even laying next to the fans, giving occasionally the microphone to them with… ehm… disappointing results. This time, he didn’t pick any songs from the fans’ requests although many were already in the setlist. In “Dancing in the Dark”, the new fashion seems to be to dance with birthday girls, so I noticed about three candidates.

Max Weinberg was outstanding, taking over the center of the stage, Roy Bittan, the “Professor”, was… teaching on the piano, also hosting on it Bruce Springsteen on “Raise Your Hands”, and Soozie Tyrell was proving how rock can a violin be (and the acoustic guitar, but that we knew). Gary Tallent is a standard value on bass and Charles Giordano intellectual style fitted more to his accordion than his keyboards playing. On the back of the stage, the horn section was astonishing, with Jake Clemons having substituted with the best possible way his uncle and legendary E-Street Band saxophone player, Clarence. Also on the back, the backing vocalists completed the most perfect sound I’ve ever heard live.

Stevie Van Zandt is a trademark for this band, as much as Springsteen is. As a result, he was moving around, making faces as the star of the stage (don’t forget he’s also an actor) and sharing guitar and vocal roles with the Boss and Nils Lofgren, the latter having a somewhat low profile this time.

Before concluding, I should mention that the whole event was very well organized. Friends Arena is located in a Stockholm suburb and you can approach it with the commuter train and about 700m walk. The queue for the arena, around five, when we arrived, should have been around 300m with many of the people being red from the sun. When the doors opened, we entered quickly and easily managed to get to the front of the arena, avoiding that special t-shirt for the 11th May show. At the end, we exited really fast from the main and a side exit of the stadium, while trains were filling up and leaving continuously for the center of Stockholm and also Uppsalla, accelerating our return.

It was a really, really enjoyable night and an everlasting party. This band knows how to give a great show and if you are given the chance, don’t miss them.