This was the hottest summer in Sweden for the last 50 years and responsible for this is Bullet’s latest album “Dust To Gold”. Hampus Klang tries to explain why this one is so good, he mentions that they were one of the hardest drinking bands, he talks about the singing to SPV, how he turned from grindcore to rock’n’roll, Axl in AC/DC, the band’s  legendary van and more. Sit back and enjoy! Interview: Yiannis Dolas 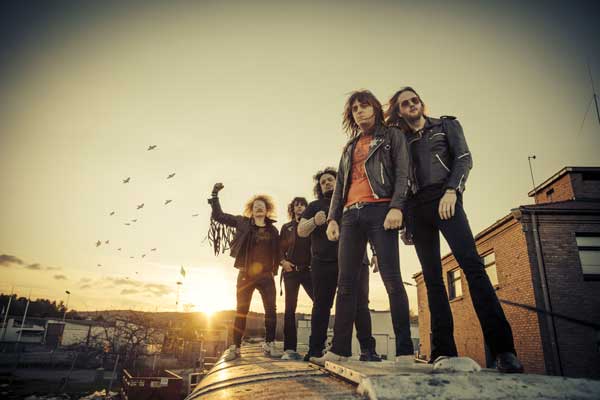 Rockpages.gr: Is it cold, or hot in Sweden now (note that the interview took place in late July)?

Rockpages.gr: This is not very hot for us, this is rather normal!

Hampus: Yeah, I can imagine! 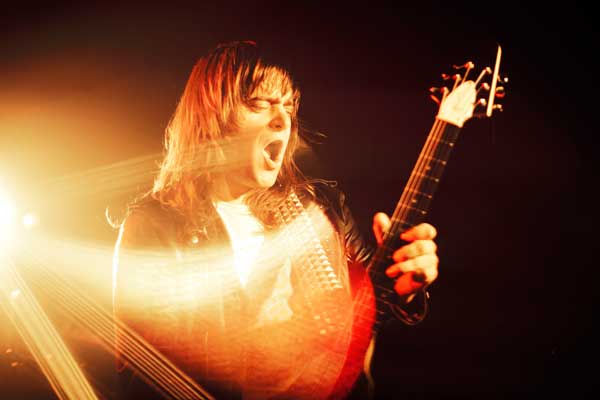 Rockpages.gr: “Dust To Gold” might be your best album so far. But, my question is that you didn’t seem like you did something different music wise, compared to the previous albums. So, why is this one is so much better than the rest you’ve done so far?

Hampus: Ahh, thank you very much! I think it’s just the fact that we took so much time to write the songs. We did so many demos. For some songs we made up to 50 versions until we were satisfied. I think we learned during the years what fits us well and what fits best with Hell Hoffer’s vocals. On the “Full Pull” album we wanted to sound more like we did in the beginning. The real heavy metal. I am really happy with the production too. We recorded with the same guy. What can I say? I am really happy with the result and everything. We took a lot of time in the studio as well and we tried hundreds of amps…

Rockpages.gr: I believe that this could be a nightmare, if you have several different versions to choose from for ever song and to make sure you will make the best of it.

Hampus: Not really! You don’t do a new version if you are satisfied with the one before. Sometimes if you write a song in “A” maybe it doesn’t fit with the vocals and you have to change the key, maybe play in a different one. When we recorded the “Full Pull” album we had Nicke Andersson as a producer. He was very much into take away all the extra parts and just go for the verse and chorus and guitar solos and that’s it. I am also happy that we got a heavy song, like “Dust To Gold”. We haven’t managed to do that before…. That “doo doo doo…” I think it’s a good variation between fast and heavy. Hehehe! 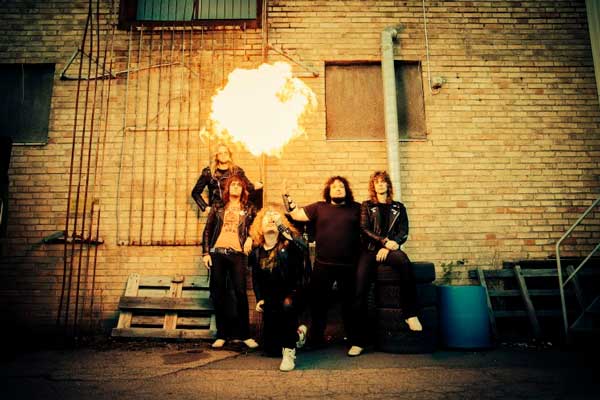 Hampus: Ahh, hahaha! I guess all albums are about life on the road. Well, it’s not so much about that as for waiting in the bus to play in the next place and open a beer! Hahaha! It’s not that mysterious. It’s just moving on every day.

Rockpages.gr: Is it only a beer?

Hampus: It depends… we used to be the most heavy drinking band.

Rockpages.gr: Which songs are the most difficult to write, the fast or the slow ones?

Hampus: I think the slower ones are a little bit harder. I always try to write songs like “Bite The Bullet”, or “Stay Wild”, really simple sing-along songs. Those can be difficult to write. It’s only three or four chords, but that’s what people really remember. I think “Fuel The Fire” is quite easy to sing along to and remember. 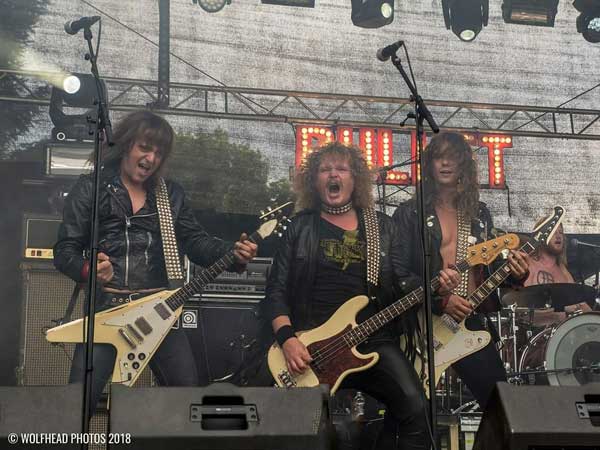 Rockpages.gr: Can you tell us a bit more about “Fuel The Fire”, which I’d say is one of the best songs on the album?

Hampus: Judas Priest had this tour called “Fuel For Life” so I got the idea from them to come up with a title… I have to think now, what happened? (humming the melody) I think it was another song from the beginning that we didn’t manage to do. We had a few riffs and we put it together. There were some left over parts that made this song.

Rockpages.gr: How do you usually write your music? Do you start with a riff, do you jam altogether in the studio and come up with a song?

Hampus: We have tried so many times to get to the rehearsal room and try to write something together but it’s hard to come up with something in the moment. It’s so much better to have a riff or a chorus title, something to work on. Then we’d bring it to the rehearsal room and we have a small studio there, so we can record ideas and work on the songs. Back in the day we used to play and see what we could come up with, but now we are more prepared before we start to rehearse, so it’s much easier to do it like that. 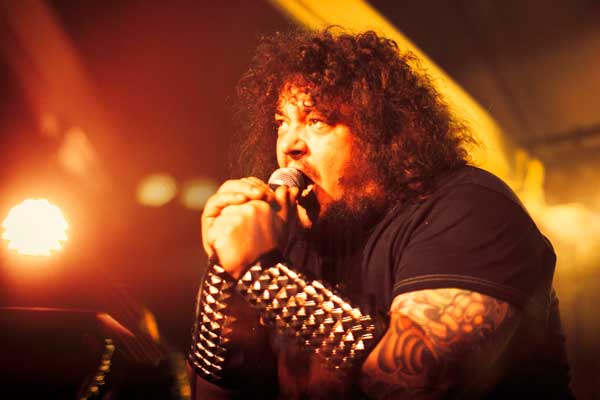 Rockpages.gr: Recently you changed record companies, you moved from Nuclear Blast to SPV. How was that?

Hampus: Well, we met the SPV guys and they seemed very much into the same side as us. We worked really well and we got a good deal with them. I think it was time to change.

Rockpages.gr: We are talking about two of the biggest companies in rock and metal in the worldwide, so is this like a compliment for you guys that you do something really well?

Hampus: Yeah! I’ve been doing this for twenty years. It sounds good when you say it like that! I am very happy and we are all with the new label.

Rockpages.gr: What would you say that are your influences and for you personally what are your guitar gods?

Hampus: Ahhm, what can I say? I started to listen to music when I was really young, like 6-7 years old. Then it was more softer hard rock and then I got more and more into more brutal stuff like thrash metal, core and all that. The main influences for Bullet are of course AC/DC, Judas Priest, Saxon, W.A.S.P., Accept, Rose Tattoo… all good late ‘70s early ‘80s metal. I am more impressed by guitar players that can write good songs, who are good song writers. For example the guys in Priest and AC/DC, Michael Schenker, Iron Maiden maybe… 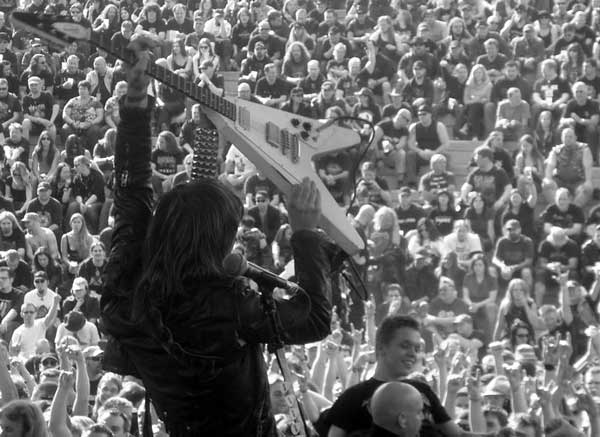 Hampus: Yeah, the drummer, Adde (ed Adde Mitroulis), is from Greece! He plays for General Surgery. I don’t know if he is a member of any other bands now. You have to check him out, he is good!

Rockpages.gr: So how was that transition from grindcore and the extreme side of heavy metal to Bullet?

Hampus: Ahhmmm, when we were like 18 or 19 and we played all the time in different bands. Even the members from Birdflesh were in the early lineup before we were called Bullet. So, I used to play with Hell Hoffer and Gustav (ed Hjortsjö), our bass player when I was 16 and we used to play this kind of heavy metal. We played brutal metal. Me, I like all sorts of metal it’s not a big thing really. I played in thrash metal band called Hypnosia which you also haven’t heard of. We’ve released an album in 1999 or 2000 called “Extreme Hatred”, it’s a little bit more brutal than Kreator, same style. 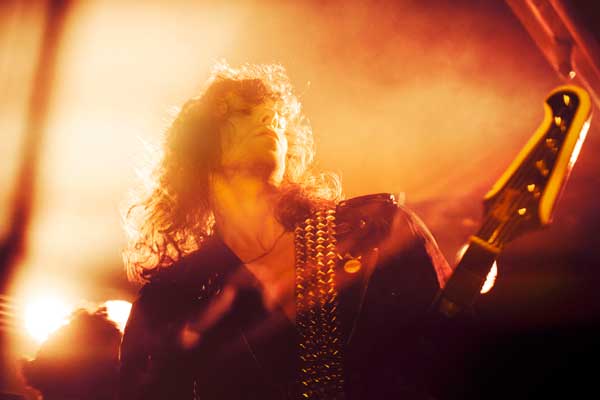 Rockpages.gr: You mentioned that you played with a Greek drummer before, but I don’t think you’ve ever been to Greece, have you?

Hampus: No, I don’t think I’ve been there either. I think Birdflesh has been there often and played gigs when I quit – it was to hard to be in two bands. Especially during the “Bite The Bullet” years. We toured like 120 shows per year. We were touring all the time, so it was impossible to play in two bands. It was a bit sad, but I had to quit the band.

Rockpages.gr: What would you say that it was the most important moment for Bullet so far?

Hampus: Ehhmm, most important… of course opening for AC/DC was magic and scary! But, I also I have to say when we started to record “Bite The Bullet” album it was the first time we really felt like “shit, this is the same quality as our heroes”, like the songs “Dust To Dawn” and “Bite The Bullet”, we really felt that we are on the right track and now it sounds like we have wanted for so many years, so that was also a fun thing really. 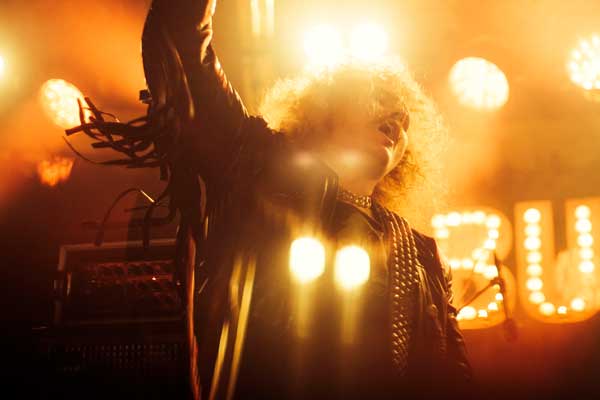 Rockpages.gr: What did you think when Axl Rose joined AC/DC?

Hampus: Ahhh, from the beginning I thought it was the most stupid idea I’ve ever heard! Because that band has so much integrity and it’s so different for that band to change the singer. What can I say? I think he sings really well the Brian Johnson songs.

Rockpages.gr: I think he is good with AC/DC…

Rockpages.gr: I know that the Bullet bus is famous and you travel everywhere with it and it’s a Volvo, is that a coincidence that it’s a Swedish automobile?

Hampus: Yeah, it’s a classic Volvo. We have so many fun stories with the bus. The German cops took us when we were playing in Wacken some years ago, they said that we aren’t allowed to drive it. Back when we started the band we wanted to become big directly and we went for the big thing from the beginning. Back then it was a huge thing to buy a bus for some young hard rockers. It still works and now they have changed the law in Sweden, so we don’t have to go through car inspection with it, so that’s quite good. 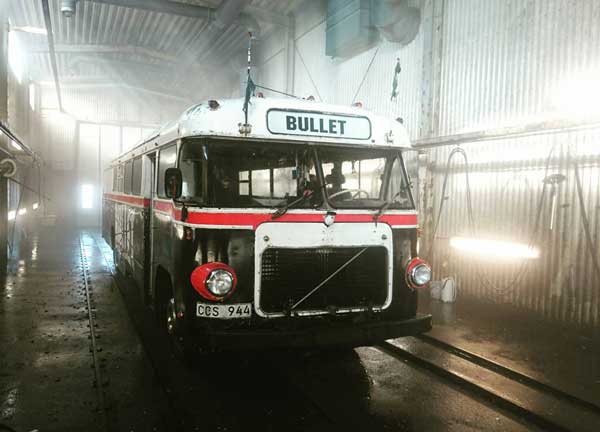 Rockpages.gr: If you were going to travel to Greece to play a show, what would you put in the van?

Rockpages.gr: And if you could bring with you any band that you like to make it a special Bullet package which ones would you bring?

Hampus: Ehhmm, well AC/DC, Judas Priest… that would be a good package!

Rockpages.gr: What are your wildest dreams for Bullet? Something that you would like to achieve? 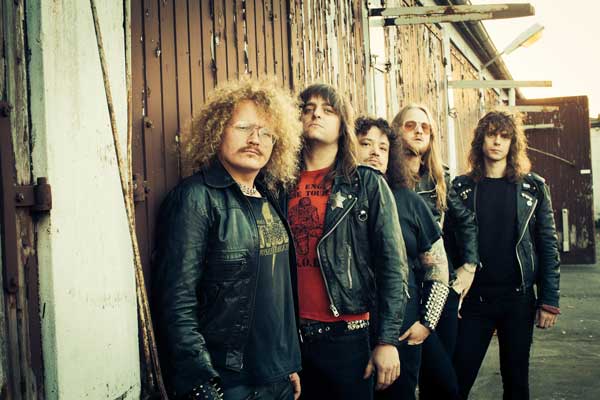