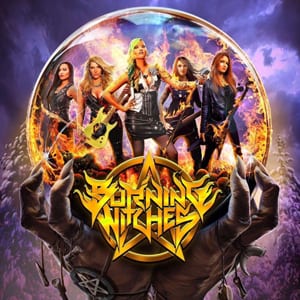 Burning Witches is an all-girl heavy metal band from Switzerland that is relatively new since they were created in 2015. In 2016 their first demo became the “demo of the month” in Metal Hammer Germany. From the first riff of “Black Widow” the Witches show their teeth. A combination of Judas Priest and Helloween of the first 2 albums with vocals that sweep you starting off as normal and reaching higher and higher. The following tracks “Burning Witches” and “Bloody Rose” are very promising and dynamic. The voice of Seraina Telli is crystal clear and the choruses she sings are memorable. The culmination of her voice capabilities is the song “Dark Companion”. The composition abilities of the girls are high: modern high-quality heavy metal that sounds very pleasant, with some brutal vocals and lots influences of classic metal bands like Priest, but also with a very personal style. If I had to pick out some tracks, those would be “Black Widow”, “Save Me” and “Creator Of Hell”. Switzerland is producing quality metal bands such as Celtic Frost and Coroner and now it’s giving us this great band. A very pleasant surprise and suggestion for this summer.