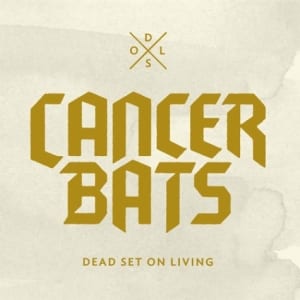 Fourth studio album for Cancer Bats, who are active since 2004. Before the release of the record, frontman Liam Cormier said that the group’s new work would be more upbeat in relation to ‘’Bears, Mayors, Scraps & Bones’’ of 2010, musically as well as lyrically. He even mentioned some indie rock influences such as ‘’Helplessness Blues’’ by Fleet Foxes! In the end there was nothing to worry about, because ‘’Dead Set on Living’’ is nothing if not a hardcore record. It does have easily approachable songs compared to the past though; compositions that breathe more and make the forty minute length pass quickly. The riffs written by guitarist Scott Middleton stem from various hard rock/metal schools; a bit of sludge, a little southern and some Dimebag. There are also plenty of the pinch harmonics that Zakk Wylde likes to use.
A repetitive but likeable album for the Canadians. There are some guests as well, Dez Fafara (Devildriver, Coal Chamber) being the biggest name on the list. The track ‘’Bastards’’ that he’s a part of is the best thing you’ll find on ‘’Dead Set on Living’’.