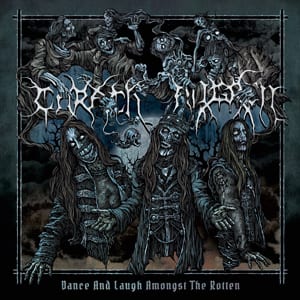 First time that I listened to Carach Angren, which I knew only by name, without digging further into their music before. Their name is taken from the epic world of J.R.R. Tolkien and means “Iron Jaws” in Sindarin, a fortified pass into Mordor.

A very peculiar case of band, as every release of them is concept telling stories about ghosts or folklore. In this album, they tell us what happens when a girl plays a little more than he should with her Ouija board. They have three main members, all founding and constant since the beginning, and they use session musicians on studio and live in order to fill the extra guitar, bass and violin needs.

Their style of play is symphonic black metal, based more on mid-tempo songs without letting completely out the…traditional fast parts. Their music in general has a lot of variety, as they have a lot of theatric and atmospheric parts that could easily fit in a scary movie. That can easily be understood by the differences that songs like “Blood Queen”, “Pitch Black Box” and “Song For The Dead” have to each other for example.

In conclusion, a very good album from the Dutchmen that made me start searching for their previous four records. Check them out.