A real jewel made its appearance in Greece at quite hard times. A jewel which shines through a bottomless darkness. Chaostar with Anomima put aside lots of standards of the hardcore fans of standards. In front of me I have a very interesting and equally special case. A person whose voice left me speechless when listening Anomima. I didn’t expect – while sitting on the sofa of the studio – that I would be so much transfixed by the presence and the spiritual performance of a person who

“exposed” her soul (to use her own words) not in front of a camera, but in the ears of the signatory who delivers it “untainted” on the readers of Rockpages.gr. Ladies and Gentlemen…Androniki Skoula!

Rockpages.gr: Before I even complete the first listening of “Anomima”, the title “The Opera Of Darkness” came to my mind. Do you think I am near to what Chaostar eventually present? 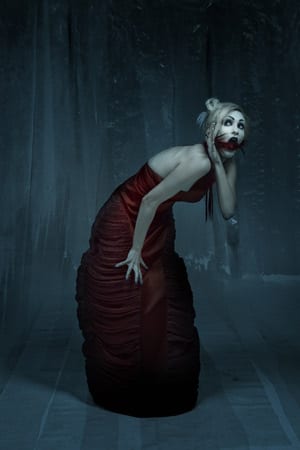 Androniki Skoula: Look… it depends on what way someone defines the meaning of darkness; for example, we refer mostly to the light and the shine of knowledge that some brilliant persons have in this album. However, there is a dreadful journey into a bottomless darkness to get there, so in that sense, yes. But not in the sense of staying in the darkness, the lewd of darkness; these are two completely different things. The fact that the birth may occur through processes which are unknown and can also be painful, cause pain is everywhere in life, is something you will understand by Chaostar and the “Anomima” especially, and it’s a correct interpretation. However we are not interested, at least in this album, in staying in this darkness. The objective is the shine, a shine out of the brightness, the painting. I don’t talk about the brightness of the sun; I talk about the truth, the peace that shines by its own light. However, reaching that point needs to first pass the process of the deep darkness.

Rockpages.gr: How far is “Anomima” from what you had in your mind starting to create it?

Androniki Skoula: It is very far from it and very close at the same time. It’s very far from what we had in mind about the music and the lyrics, in the terms that due to the experiments, we also face a result that we couldn’t have imagined and that’s the interest of it, cause we like to bring opposites together, close enough though, cause we knew that the path, the direction we had from the beginning was the same. To explain it more simply, on a practical level, when a band wants to expose its soul and show it to the fans, that’s a direction. So this, regardless the point the band will reach, is a common goal and that is to expose our souls. One will expose his soul through his vocals, the other through his musical instrument and that is a common direction which makes it absolutely specific. On the other hand, the fact that anyone can join the band having various ideas and can put them on the table and let them mature for months to listen them mutant in the end, this may bring us in front of results that we could not imagine. So, that’s why “Anomima” is very far and at the same time it’s very close to what we had in mind.

Rockpages.gr: At what audience do you think the album is aimed?

This is a question that is really asked many times by the journalists. They are wondering at the end what is going on here, who is going to listen to that? We didn’t have a target group in mind when recording this album because this would limit our creativity. When you target somewhere this creates demands, so we didn’t start from this but we end up asking ourselves the same question. If I have to give an answer is that we addressed to the man who has opened his gates and his energy flows, so he wants to listen to new things or see a different view of what he knew by now.

Rockpages.gr:  In the album you sing in four different languages. Did you take a big risk with this?

Androniki Skoula: Eventually, life means taking risks… for example, someone may wed a first class person, under the best conditions, owning a large house for his grandchildren and his great-grandchildren to be living there, the so called Greek dream, and end up waiting for the weekend to be able to escape from the damn city and go for a swim! I have completely demystified the issue of risk in my mind…; what exactly guarantee means? Is it to create based on guarantees? This way we expand our mental illnesses, diseases and neurosis. We never felt like taking a risk. Maybe at some point we said “Oh my God, what are we doing?” but it was not enough to prevent us from doing it. 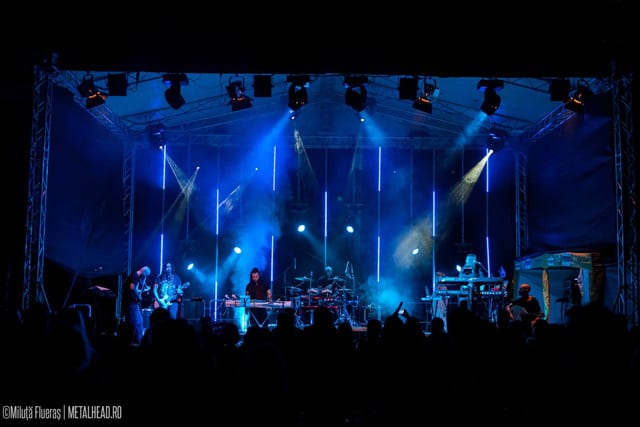 Rockpages.gr: Let’s talk a bit about the guests we meet in “Anomima”. Fernando Ribeiro and David Vincent are great; however do you think that musicians of your level did really need them?

Androniki Skoula: I don’t want to answer in the terms that we needed each other. Whenever there is goodwill by some people for cooperation, they do cooperate. They don’t think that working together is required. Vincent told Christo “what you do is art, it is an honor for me to participate in what you do.” At that point, there are no boundaries of must or not collaborate for advertising purposes or for effect. We had sent almost the half part of the track, we needed a voice that speaks by itself … we are satisfied with the result and certainly the same stands for Fernado who said “very interesting, you don’t use an electric guitar! What you do is so important, without any electric instrument! You are focused on music and you are making an effort with cellos and violins!” There was cooperation and communication with these people and so we never thought much of it. I think that they have given a lot to the album and you can notice it just after you have listen to it many times.

Rockpages.gr: The members of Chaostar which are also members of Septic Flesh are always on tour around the world. Have you planned a tour to present and support “Anomima”?

Androniki Skoula: The truth is that we never had much time. Now, I guess that the one will bring the other. From what I can understand, when Christos finishes the one he is starting the other and this is what he is going to do. I hope Septic Flesh continue through time the great success they have, till the point they won’t have enough time for the Chaostar… (laughs). However, I think that the guys will manage to find enough time for both of the bands. I cross my fingers for this moment and also for some concert proposals. 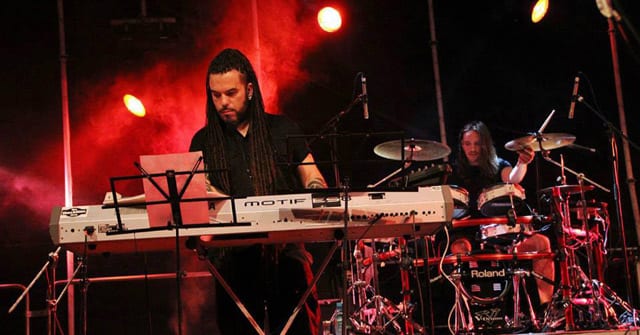 Rockpages.gr: What would be the ideal stage for you for a live performance this time?

Androniki Skoula: Well, this requires a theatrical venue, an amphitheater with a stage. It’s a kind of performance which acts as a participation. Venues can also create connotations. When a performance is given in an ancient theater which is carved at the edge of a hill, you are creating the right mood for the audience to stay and watch. The whole thing is participation by itself. That’s how the architectural of a venue works and the same thing works on many other cases. Even a small detail counts. As an architect I observe that. The theatre that encloses the Dionysian and the Apollonian element is the ideal setting for me to give a performance with Chaostar and personally I’d like to visualize it in the most dynamic way because it creates images which I’d like to externalize. I’d like to sing, to play music, to express myself with my body; I’d like to give a visualized aspect because I think there is one. It doesn’t stop at music, it creates images as well. So I think performing in a theatre would also be the best idea for better sound quality. Chaostar’s sound is a great problem. It’s a drama for us; we are under great pressure, checking if everything sounds well, especially the whistles on the microphone, the screams, the voices, the operatic elements, a million things that I think in closed venues would work better. So what I’m looking for is a theatre.

Rockpages.gr: Reading your CV, it’s easy for someone to realize that Androniki isn’t a singer by chance. What’s the music style that you’d like land up as an artist?

Androniki Skoula: This is something I wouldn’t dare to say because life can prove me wrong. I wasn’t aware of Chaostar, so when I met Christos at the audition I wasn’t familiar with the band. So I went through the process to listen, to wonder … in what way he does that, to see in what way the great singers he was working with, were singing. So four to five years later I return to support it as my own kid wholeheartedly. Maybe a few years ago I wouldn’t have imagined this so I wouldn’t risk saying anything. Definitely, my burning desire is opera and this flame never fades. It’s a flame that every opera singer can feel and agree with me that is always remaining inside you. However, nothing works as a headstone for me. The fact that the opera is my desire doesn’t mean that I can’t do some other things; the good player plays everywhere. I go on with Chaostar; regarding opera I will go abroad to a teacher who is waiting for me. I’ll do some lessons in order to give me some first guide principles, I’ll look for some opera auditions, that means that I’ll make my first steps. However I don’t know what will happen, whether I manage it or not; it’s a hard field and there are also many imponderable aspects; however I will certainly try hard there, but my passion for what I’m doing with Chaostar won’t stop for sure. 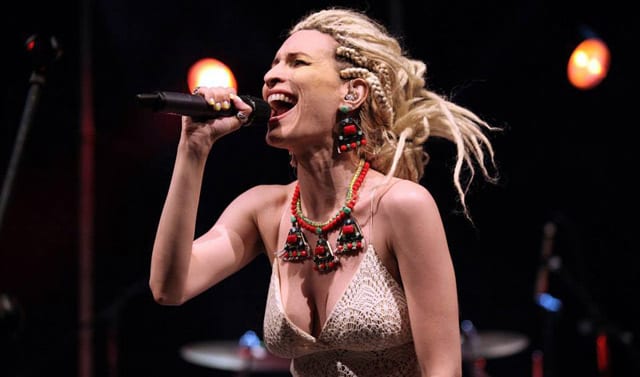 Rockpages.gr: Is there something about “Anomima” that the fans need to know and won’t find it on the internet regardless how much they search?

Androniki Skoula: It depends on what they are searching for… I don’t think so… apart from some parallelisms we use in our songs, there is nothing else they can’t find.

Rockpages.gr: The same question about the Chaostar.

Androniki Skoula: Neither there; I think that if someone wants to find some information about the lyrics or anything else, it is at his own discretion, it depends on what way he sees the situations. For example, the ”Omorfi Kori”, a song that is written in Greek language and it’s a traditional Cretan song. At the time I was writing it, I had in mind Ipatia. To me, this song is the hymn of praise of Ipatia’s life, who received the confirmation or the husky order to reach her limits at knowledge and that cost her life. If that’s what interests the fans, they can see it through my interviews; I explain these things many times. I don’t think that there is something hidden, however someone may have to read between the lines for some meanings… 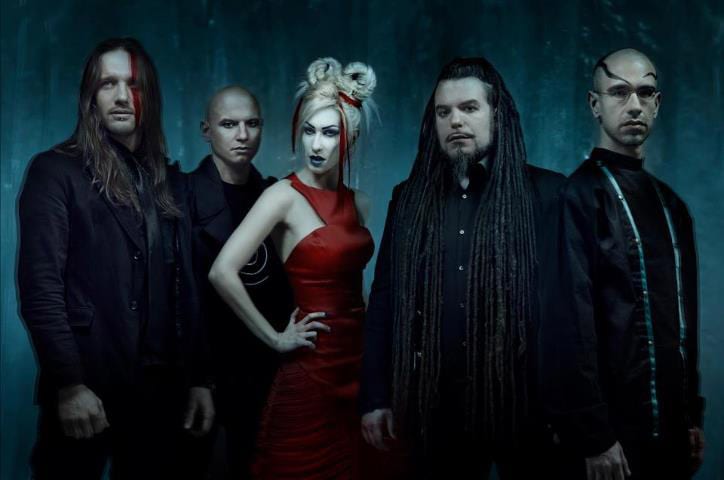