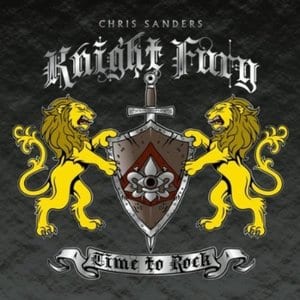 This is what I describe as an old school record…only the infamous “scratch” sound from the vinyl is missing! It’s like time had stopped and Chris Sanders took us on a time travel back in…let’s say, 1985-86. And if someone is asking for a more precise information regarding the place of our journey, well I’d say that we are definitely on the other side of the Atlantic, somewhere in America. You see, “Time To Rock” is an album that brings in mind such bands as Shok Paris, Q5, Leatherwolf, Fifth Angel…even Queensryche of the EP/Warning era.
Chris Sanders shows absolutely no sign of following trends and fashions thus he doesn’t make any attempt of hiding his 80s influences. And it’s not only the song quality that wins you over but also you are pleasantly surprised by Knight Fury’s line-up: apart from guitarist extraordinaire Chris Sanders, we get to find David Ellefson, Ken Mary and singer William King (his voice is somewhat reminiscent of late Crimson Glory vocalist Midnight and Lizzy Borden).
Chris Sanders’ guitar parts are definitely the absolute standout element of the album as they are not tiresome at all and impose with their blend of melody and virtuosity. You must definitely check this band out…unless you are searching for groundbreaking, modern offerings. As I said, this is an old school sonic effort!
Highlight: Sanders’ name may sound familiar to some of you out there…he occupied the guitar position in Lizzy Borden (circa 2007-2010).