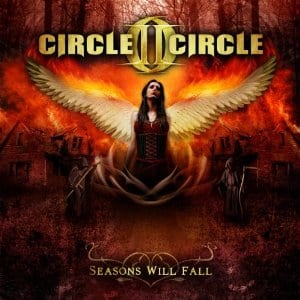 Zak Stevens returns with yet another Circle II Circle record, the 6th one in the last 10 or so years (since Savatage remains on a rather permanent hiatus). If nothing else, I must hand it to Stevens for remaining a productive musician whose voice is always on a high level while one cannot escape the fact that upon the sheer listening of Stevens’ voice, you find yourself back to the early 90s when Savatage released such masterpieces as “Edge of Thorns” and “Handful of Rain”.
Truth be told here; I wasn’t that satisfied with the last sonic effort by Circle II Circle (“Consequence of Power”) so I was kinda reserved in regards with what “Seasons Will Fall” had in store for us all. Luckily, Stevens recorded a bunch of well-crafted and memorable tunes that balance on the glorious Savatage past (eg. “Dreams That Never Die”, “Only Yesterday”) and on the modern metal aesthetic (eg. “Downshot”, “Diamond Blade”) mainly when one focus on the guitar sound as the melodies rely heavily on the 90s. The band’s performance is flawless and the production reminds at moments the majesty of the Savatage records especially when the keyboards make their appearance on a song.
All the hardcore Savatage fans will surely buy “Seasons Will Fall”. I must say though that the same must be done by all the fans of the melodic metal sound in general. They won’t be disappointed by this one from Circle II Circle!
Highlight: Never Say Never…but I don’t think that we will ever listen to something new by Savatage in the future…what a shame!